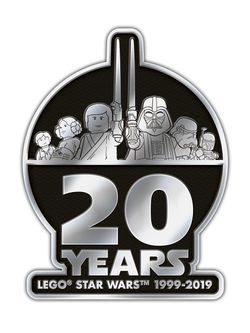 Today marks the 20th anniversary of LEGO Star Wars! LEGO's issued a press release talking about the theme's history and some obscure facts- check out the opening below, or read the full press release here.

This is a description taken from LEGO.com. Please do not modify it. (visit this item's product page) The LEGO Group raises its lightsabers to toast the fans instrumental to the success of the LEGO® Star Wars™ 20-year legacy and launches five new special edition sets to mark the anniversary.

Twenty years ago, in a galaxy far, far away, the LEGO® Star Wars™ collaboration entered the lives of millions of children and fans around the world. Today, the LEGO Group is celebrating the 20th anniversary of the much-loved range that continues to unite fans of all ages and has inspired some of the greatest battles ever built.

LEGO Star Wars was the LEGO Group’s first IP franchise and has since remained one of the most popular, allowing fans across generations and geographies to come together in fun and challenging building exercises. Around 700 different sets (including 1,000 LEGO Star Wars minifigures), five video games, several television and web series, and an abundance of other fun merchandise have been released since the initial launch.

Jens Kronvold Frederiksen, Creative Director of LEGO Star Wars, said: “LEGO play and Star Wars is a dream collaboration for us, and we feel privileged to have one of the strongest fan communities out there who continue to inspire and challenge us to push the boundaries. This 20-year milestone is really a dedication and testimony to our loyal fans who have built, reimagined, battled and shared their LEGO Star Wars adventures with us for two decades. Twenty years on, the Force is still with us and there’s still so much more to come.”

Read the rest on LEGO.com

What are your favorite things to come out of the Star Wars theme in the last 20 years? Let us know below!