Cookies help us deliver our services. By using our services, you agree to our use of cookies. More information
Navigation
Actions
Reviews
Fan space
ShoutWiki messages
Wiki tools
From Brickipedia, the LEGO Wiki
(Redirected from Gresh)

Gresh is a BIONICLE character. He is a Glatorian, and met Mata Nui when he first arrived on Bara Magna. When warned of the impending attack on his home planet by Makuta and his armies, Gresh donned new armour and fought to protect his people. He survived the battle, and is now living on the reformed Spherus Magna. 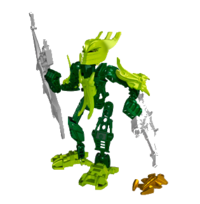 Gresh has been released more than once and has appeared in other products, and so may be referring to: