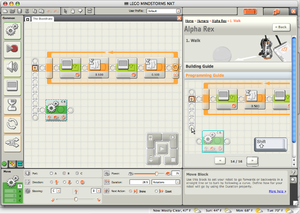 Screenshot of the Lego Mindstorms software for the NXT.

Mindstorms NXT, a version of the Mindstorms theme, was first released in 2006 and it is out of production since 2013. They are LEGO Technic robots, making them more expensive then most Mindstorms sets. In 2009, a second version with new parts was released named Mindstorms NXT 2.0.

Besides the LEGO-supplied NXT-G, there are a number of other programming languages and environments that support the NXT, including Bricxcc, RobotC, leJOS, etc...