I picked this set up for my birthday, being an avid collector of BIONICLE and Hero Factory. I would mostly like to point out how smooth the set looks overall. While I have already disassembled the set for further MOC-related uses, I can still refer to pictures.

Unlike usual sets, Hero Factory sets do not have minifigures or vehicles in them, usually. Therefor, I will be adding sections based upon different parts of the set. 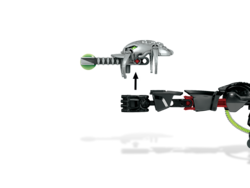 Despite the set being titled "Black Phantom" it also comes with another character, his 'pet' Arachnix Drone which has the multipurpose of being his weapon. In the Hero Factory television programming, this drone has the power to replicate itself. I have one downside, however. In the show the Arachnix is the same color as Black Phantom's legs - I believe they're Metru Red - however, this incarnation is silver. The head piece is very detailed and has two spaces for eye pieces inside, a new method I haven't seen before aside from another new HF set 6228 Thornraxx which has not yet been released in the United States. The piece is very detailed, the top featuring a very organic texture. The head itself has five connection points for the "legs", four of which are put to use. The head requires a technic axle to be hooked onto anything.

The set features a very symmetrical physique, both the arms and legs are consistent on both sides, unlike some sets released previously. The cladding on the legs has improved very much so since the the release of 2235 Fire Lord which didn't use the technique very well. I do have one knit-picky issue with the legs, the feet do not sport a black shell, but instead a gunmetal one which does not match the rest of the set. It seems ridiculous to me that they could not manufacture two more black shells just to make the set look nice.

I have to admit the torso is considerably improved, too, believable or not. The new chest armor is amazing and is used well in the Ultrabuild subtheme of Super Heroes, as well. The supports for the legs work pretty well, too.

The arms add a lot of muscularity to Black Phantom as the bubble shoulder armor (Part 98571) looks very uh... strong-like. ;D To my pleasure, both come with a hand, as well! Surprise!

The head comes in a new color, Trans-Bright Green which looks great! The helmet, for some reason, reminds me of the Piraka from BIONICLE. Love it. Also, the infected-quaza spikes on his head are a nice addition. The helmet contains a female connection rather than a male connection (Sorry, technical names. =P) which is very interesting. I wish they could have switched the red axle out with a black one.

The weird looking things on the back of his back are supposed to be called "Saber Strikers". The transparent shells featured on them are always welcomed and why not two more daggers? Also, I really like the part transparent/part lime tubes that they added. Fabulous.

The Mace Staff is very neat. I'm not saying I like the idea of staffs (3/4 titan villains have had them so far) but the idea is pretty neat and genuine. The sword, which is called a "Razor Saber" is also very neat and a great addition to my collection.

When you put all of the parts together we get a pretty nice set. The Metru Red looks very nice and was a worthy surprise for Hero Factory. 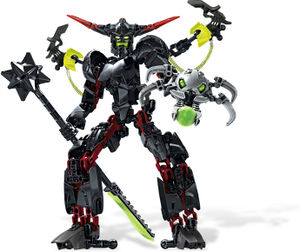 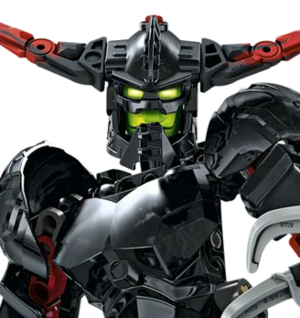 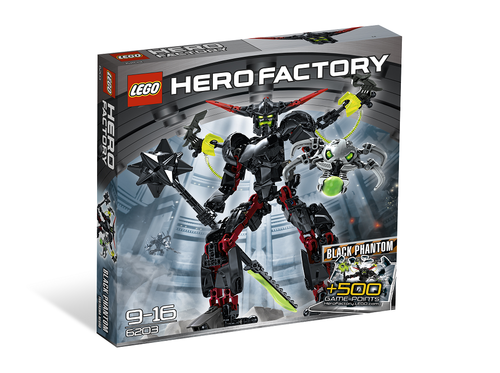 The price is traditional for a titan set, $19.99 USD, which isn't that much, really. Even though they've been $20 for the longest time, I'd really prefer something more considerable like $15.

Overall, a nice set, but the price could definitely be better. Very menacing! I would rank this as the second best villain of the wave (Does not include Thornraxx), the first being Toxic Reapa. This set is a worthy villain and is much better than the earlier Fire Lord-like builds.