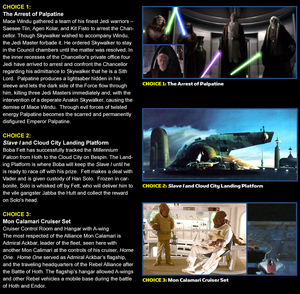 Details about each of the options.

The winning set was announced at the Toy Fair February 2009.

It was confirmed after the voting by Toys 'R' Us representatives that the "Slave I and Cloud City Landing Platform" came in a distant third, and was not implemented into the set.[1] It was later found that the winner of the contest was the Mon Calamari Cruiser Set, and became the 7754 Home One Mon Calamari Star Cruiser.