483 Alpha-1 Rocket Base is a Classic Space set released in 1979. The set contains a rocket base with launch tower and control centre, a moon buggy with trailer, a rocket and three Classic Space astronauts (one red, two white).

This set was only available in the US, where it was sold instead of the identical set 920 Launch Pad that was available elsewhere. 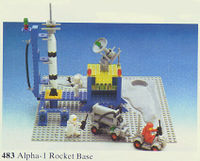 The Rocket Base as seen in a catalog.

The base is built onto a crater baseplate and consists of a control room and a collapsible launch tower. The control centre contains several computer monitors and has a rotatable dish antenna on its roof.

The rocket has a small satellite/spaceprobe mounted on its tip. The trailer has several tanks with hoses on its back.