LEGO System is The LEGO Company's main line of building elements, minifigures and sets. It features the iconic standard LEGO bricks, which evolved from LEGO's first series of Automatic Binding Bricks that first appeared in 1949. The new pieces were first marketed under the name LEGO Mursten in 1953 and from 1955 to 1970 in the System i Leg series of toys. Later it was simply known as LEGO System. Most System bricks can be used with TECHNIC bricks. 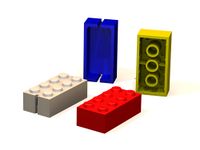 The Automatic Binding Brick on the left, and the modern LEGO System brick (first known as Mursten) on the right.

The 1×1-stud System-brick measures about 8×8×10 mm. The sizes of almost all other LEGO construction toys are derived from this size and can be combined with it.

With the introduction of minifigure-compatible sets in 1978, three major playthemes were introduced, Town, Castle and Space, inside each of which were later added several new subthemes, that mostly consisted of new distinct factions of minifigures and were all related to the respective main theme's core subjects.

With Boats and Trains, two minor themes where introduced that complemented Town but were not counted as parts or subthemes of it. Another unique theme was Model Team from 1986, whose sets focussed on more or less accurate scale reproductions of real world vehicles and were not designed to be minifigure-compatible.

Beginning with Pirates in 1989, LEGO added additional main themes to the LEGO System line that stood beside the three initial main themes. These four major theme made up the bulk of the LEGO System sets of that era and were also the most popular themes. Another minor System theme Belville was introduced in 1994, which contained larger figures and more specially-designed bricks. The next addition was Aquazone in 1995 followed by Western in 1996. Another small theme Time Cruisers was introduced in the same year.

The, now six, major minifigure-themes (Town, Castle, Space, Pirates, Aquazone and Western) were subjected to bigger changes in 1999: Space, Pirates, Aquazone and Western were discontinued for the time being. Castle was rebranded to Knights' Kingdom. Town's core subjects were outsourced to Town Jr. and later City Center, while still being complemented by different subthemes which were in most cases only remotely related to city-life.

An exception was the smaller Adventurers theme from 1998 that was complemented with different subthemes until its eventual discontinuation in 2004.

The smaller Alpha Team was introduced in 2001 and lasted a while, unlike many of the newer themes have.

Instead of slowly adding new factions and sets to existing main themes, most themes were now self-contained series of sets that in most cases had all of its sets released in its first year and only lasted for one or two more years. One of this new themes was Rock Raiders from 1999 and Life on Mars from 2001, which was a shortlived revival of the old Space theme.

The other side of the medal were themes that were based on popular media franchises like Star Wars and Harry Potter. Those themes would regularly see new releases over the timespan of several years. Another possibility of releasing sets based on licenses was the Studios theme.

Nevertheless, there were still some original LEGO themes that ran for several years and were regularly updated with new sets, like Alpha Team that ran from 2001 to 2005 and to a smaller extent Knights' Kingdom II that saw new releases from 2004 to 2006.

With the introduction of City in 2005, the constant rebranding of the Town theme in the years after 1999 came to a halt. It also marked the first true revival of one of the classic major themes since the initial concept of complementing a consistent long running theme by regular releases of new sets saw a renaissance as well.

Other recent themes were Castle (2007) and the continuation of Pirates. Space saw a partial revival in the form of Mars Mission (2007–8) and the new Space Police from 2009.