The theme was set in the American Old West in the second half of the 19th century and featured cowboys, outlaws, cavalry soldiers and native Americans. It was the first theme that introduced realistic fire arms (revolvers and rifles) that could also be found in the real world of today, while Pirates only featured antique weapons like muskets and flintlock pistols. It was also the first theme to introduce cultural characteristics for minifigures. That being the printed head pieces for the indians.

Gold City under the watchful eye of the Sheriff, while it's harassed by bandits.

Western was the first minifigure-compatible Wild West-styled LEGO theme, but there have been earlier sets of the same subject. Most notably 620 Wild West Scene (1975) and 617 Cowboys (1975) which both included the old-style LEGOLAND Minifigures, that already had the same cowboy hats used today.

The first sets from 1996 focused on the aspect of sheriffs fighting against outlaws, as well as the military presence in the old west, and less on civilian life. The few sets that featured town-life served more as a back drop for the gang of bandits robbing carriages or banks. The town, called Gold City, consisted only of the Sheriff station as well as a bank and a general store (6765 Gold City Junction). The bandits took refuge at an abandoned mine outside the city. Another important element of the theme was the cavalry, based at Fort LEGOREDO.

In the second and also last year of the theme, 1997, Indians became a major part of Western. Most of the sets included teepees, along with their main settlement, Rapid River Village. None of the sets including Indians featured other types Western minifigures .

Three Western sets were re-released in 2002, similar to Pirates which also had three re-releases the previous year.

Several new pieces were introduced with the Western theme, such as the revolvers and rifles, as well as the soldiers' kepis, which has since been seen as grey in Rock Raiders and Star Wars sets, as black in Adventurers and Trains, brown in Adventurers and tan and sand green in Indiana Jones. The Bandannas used for the cavalry soldiers and the bandits were another of the new pieces that were seen again in various later sets, as were the large barrels. The gold bugle, another new piece appeared in sets of the Western theme, and later Time Cruisers, Soccer and My Own Creation themed sets.

Rare pieces that did not appear elsewhere include the Indian teepees, the hollow tree stump and various accessories of the Indians, such as the headdresses of the chief and the medicine man, the hair pieces of the other Indians and the feathers with black tips on their heads. 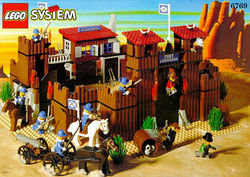 6769 Fort LEGOREDO is one of the most popular sets of the theme.