Rock Raiders was a theme that was introduced in 1999 and discontinued in 2000. It is based on space travelers/miners trapped on an alien planet. It consists of eight main sets, four promotional sets and three Minifigure-based sets, and also a video game based on the theme for both PC and the Play Station gaming console.

The eponymous Rock Raiders were a team of miners that searched for energy crystals in the underground. They had several specialized mining and transport vehicles at their disposal, and were based at various locations around Planet U, where they processed rocks to extract the powerful Energy Crystals with their refinery stations. During their excavations, they would occasionally encounter Rock Monsters (included in two different sets), Slimy Slugs, and numerous other monsters, who would often attack the Rock Raiders or their bases, usually for Energy Crystals (although some, like Spiders and Scorpions, were merely aggressive towards the Raiders). 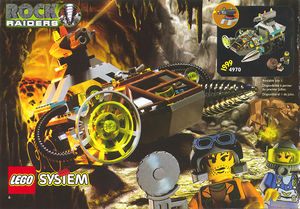 This was the third theme (the first was Time Cruisers and the second was Adventurers Egypt) whose Minifigures were individual characters with names.

The setting had several elements that were reprized, and also somewhat further developed, in the Power Miners theme ten years later, such as the occurrence of Rock Monsters and collection of crystals. Here, the Rock Monsters had just minor appearances and were not named characters, merely bearing the name "Rock Monster". 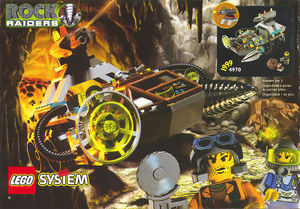 The sets of the first wave, which were also the only ones of the theme that appeared in the catalogs, all included Rock Raiders comics. The models and minifigures of the respective set the comic was included in played a major role in the story.

The Rock Raiders were traveling on their spaceship, the LMS Explorer, mapping the whole Galaxy. They had just finished their journey and were headed home, when they drifted into an asteroid field. The ship was badly damaged and, to make matters worse, a wormhole caught the ship in its gravitational pull. The fuel supply was drained in the failed attempt to escape, and the LMS Explorer was flung into a distant Galaxy. They found themselves around Planet U, a planet rich in mysterious Power Crystals. They sent down Rock Raiders to mine it, and found vast amounts of Energy Crystals to power and repair the LMS Explorer, but they also encountered many alien creatures. The team would endure numerous hardships to obtain the Crystals, but they eventually triumphed, and successfully gathered enough Crystals to return home.

The three books further expand on this story, as well as the missions from the games. 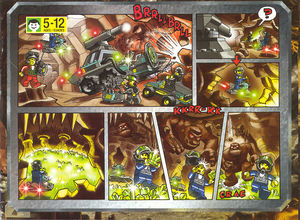 Rock Monsters are subterranean beings made entirely of rock with glowing red eyes. They feast on the energy crystals used to power Rock Raiders vehicles and are not aggressive unless their crystals are stolen. They are the most common enemy. The best way to kill them is with a Laser Beam.
They appeared in LEGO Island 2 on Adventurer's Island, where they would throw rocks at you in the biplane game. Several more were seen orbiting OGEL Island.

Rock Monsters are theorized by Docs to be remnants of an ancient civilization. When the Rock Raiders first saw them, they assumed that they were statues built by that civilization. However, after seeing their activity, Docs came to believe that they may have devolved from an advanced civilization. 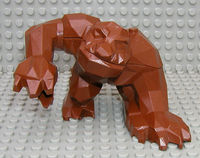 They are similar to Rock Monsters but white and icy. They too feast on crystals and can be found in icy areas beneath Planet U. In the Rock Raiders game, they are more aggressive than Rock Monsters but not as strong. The best way to kill them is with a Laser Beam. Ice Monsters make few appearances in the NTSC PS1 game. Ice Monsters do not appear in sets - the closest thing is an unpainted Rock Monster prototype. The Rock Raiders have encountered fights between Ice Monsters and Lava Monsters, however; sometimes Rock, Ice, and Lava monsters work together.

Lava Monsters are similar to Rock Monsters but fiery. They can be found in the underground molten lava caverns on Planet U. In the Rock Raiders game, they cannot be killed instantly, and the best way to dispatch them is with a Freezer Beam. Lava Monsters do not appear in the NTSC version of the PS1 game.

Slimy Slugs are very large slugs, often smaller than Rock Monsters (although some rather large Slugs have been found). They are large and are green with faint spots. Slimy Slugs eat crystals. Slimy Slugs can also be found on Ogel Island in LEGO Island 2, and push the player back when the player runs into them. In the Rock Raiders PC game, Slimy Slugs cannot be destroyed, and will drain energy crystals from existing buildings. The best weapon to use on them is a Pusher Beam.

Bats appear in the Rock Raiders PC video game. They scare Rock Raiders, and cause them to drop what they carry. 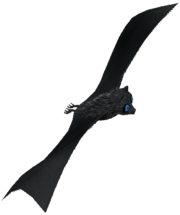 Spiders appear in the Rock Raiders PS1 video game. Unlike the small variety, these are aggressive, and will attack Rock Raiders. They can also spin Large Webs that only the Loader Dozer or the Pusher Beam can clear. There are prototypes of them lying unused in the PC Game's files.

Purple Scorpions are huge, about the size of Small Diggers. They will attack nearby Rock Raiders. They only appeared in the PS1 game. Three shots from a Pusher Beam will eradicate them.

Green Scorpions are very similar to Purple Scorpions, but they prefer to not attack directly; rather, they stand at a distance shooting plasma globules from their claws at the Rock Raiders. They only appeared in the PS1 game. Three shots from a Pusher Beam will do away with them.

Also called Rock Whales, these massive 6-legged creatures lumber through the underground passages of Planet U. Although they do not attack, they can do a lot of damage, albeit unintentionally. There are 2 types: a large green type that moves slowly, and a smaller red type that can scuttle faster than most vehicles can move. They only appeared in the PS1 game and the book High Adventure Deep Underground. The only way to remove the large Rockwhales is to use a Pusher Beam to move them into water, causing them to merge into the ground and form a bridge. The small variety move too fast to use a Pusher Beam on.

Three Rock Raiders books were released in various formats: Save the Spaceship, Race for Survival and High Adventure, Deep Underground.

Axle is trapped underground in a cave-in and the rest of the team set out to rescue him. 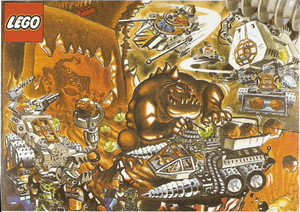 The only known storyboard of the Rock Raiders theme

The Ultimate LEGO Book contained concept art for LEGO Rock Raiders on pages 30–31, showing how the theme developed over time. The original plans were vastly different

A piece of concept art showed:

Other pictures in the book included:

Had the theme been more successful, these elements might have been reconsidered.