Castle was a theme introduced in 2007. The theme was often referred to as "Fantasy Era" or "Fantasy Castle" by fans to distinguish it from the original Castle theme that was introduced in 1978. The theme ran until 2010, when it was replaced with Kingdoms. The theme mainly focuses on fantasy creatures such as trolls and dwarves, and pits humans against various evil creatures instead of an opposing faction of other human beings. Most sets contained warriors from two opposing factions, in order to increase playability. The first protagonists of the human faction were known as the Crown knights, who fought the Skeleton warriors, led by an Evil Wizard, who appeared in the first year of the theme. In 2008 new foes, the trolls, arose, who were also enemies of the newly added Dwarves. In 2009 only three new sets were released, including 10193 Medieval Market Village which is known to be the most intricate work of European styled buildings ever released by LEGO as an official product. The theme also appears in My LEGO Network as stickers and backgrounds. 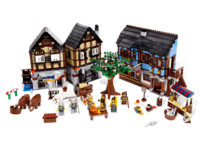 10193 Medieval Market Village is one of the most realistic medieval themed sets ever released.

The Crown knights are the faction that represents the humans and were introduced in 2007. They are led by the Crown King and their coat of arms is a crown superimposed on a blue background as seen on their shields, flags and uniforms. The faction is based at the Castle. Other buildings include a tower, a fortified port and another fortified tower. The Crown knights do not have any vehicles other than a chariot, but do, however, have two siege engines, a catapult and a crossbow. The Crown knights not only use horses as mounts, but dragons as well, as seen in 7048 Troll Warship. This faction features a complete royal family with a King, a Queen and a princess. The court also encompasses a Good Wizard and a Court Jester, as well as a general. The Crown Knights may have been linked to the Sentinel faction in LEGO Universe as they appeared in teasers and similar gear was distributed throughout the game.

Skeleton Warriors: The Skeleton warriors are the first adversaries of the Crown knights and appeared in 2007. They are living skeletons that occasionally use skeleton horses as mounts. Their leader is the Evil Wizard. Their symbol is a skull which is featured on their round bucklers and oval shields. The only building they control is the Skeleton Tower, which is also the evil wizard's lair. They own a ship and a carriage, but no siege engines. These warriors are similar to the skeleton army in the Ninjago theme.

The 7041 Troll Battle Wheel is one of the many siege engines of the trolls.

The trolls are monsters that were introduced in 2008. They have a large complement of siege engines at their disposal, as well as a large ship. They are in possession of a single building, a fortress. There are two versions of trolls, the average sized ones known as Troll Warrior, and larger ones known as giant trolls. Their symbol is an elongated skull which is featured on flags and their rectangular shields.There are four versions of the giant troll, green and orange and green and orange dark armor epic giant trolls with tattoos on there arms. Their "official" enemies were the Dwarves, but they were opposed to the Crown Knights as well, at one point capturing their king.

Dwarves: The Dwarves are a race of miners who are constantly attacked by the trolls. They were introduced in 2008. Their symbol is a winged helmet on a blue background and is featured on their round shields. Only three sets have been released, including a large mine, a battle machine, as well as a battle pack with five dwarf minifigures and equipment. In all of these sets the dwarves are pitted against the trolls. A dwarf is also included as a prisoner in the set 7048 Troll Warship. Their weapons are battle axes that consist of two axe blades from Vikings attached to a brown stick. They also use regular axes made by the same method but using only one axe blade. Dwarves use large war hammers as well.