7091 Knights' Catapult Defense is a Castle (2007) set released in 2007, intended for ages 5–12. It includes two knights with a catapult and two skeleton warriors, who are armed with a crossbow and maceball.

The Catapult's base is a simple 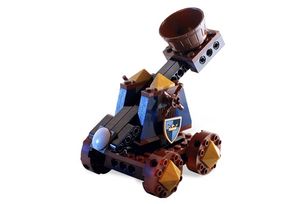 affair, with four wheels attached to it, two on either side. Attached to the base is a rotating platform which contains the catapult. The catapult itself has a wheel on one side, so the knights can "fire" it. 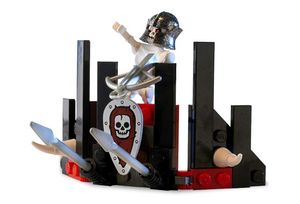 is a small wall, turned inward on either side, which has spikes mounted on it, and a shield attached to its front-most end.

This is a description taken from LEGO.com. Please do not modify it. Smash the barricade!

Who goes there? The brave knights of the kingdom do! Defend the castle and demolish the skeleton warriors' barricade with the knights' powerful firing catapult. Includes 2 knights and 2 skeleton minifigures!