The Royal Knights were one of the factions of the Castle theme, that was introduced in 1995. 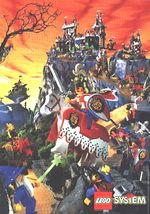 Most sets of this theme were released during its launch in 1995. The following year saw only two new sets. The Royal Knights had also two minor guest appearances in sets of Dark Forest and Fright Knights.

Although the presence of kings has already been implied on earlier occasions, Royal Knights was the first theme that introduced a minifigure portraying a king with a real crown. However, the faction comprised only one single castle (6090 Royal Knight's Castle), which was quite large nonetheless), a fortified bridge (6078 Royal Drawbridge), a small, lonely building (6036 Skeleton Surprise), and a big luxurious carriage (6044 King's Carriage). Apart from a small catapult included in 1843 Space/Castle Value Pack the king didn't own any noteworthy siege engines. They aren't known to have any enemies, but in the poster picture it is showing the Royal King fighting Majisto from Dragon Masters, but the Dragon Masters theme was discontinued a few years before the making of the Royal Knights theme.

The royal coat of arms consisted of a crowned lion head on a red and white background. The same lion head reappeared later on the royal crest of Knight's Kingdom and Castle (2013) which both have a blue background with a yellow cross.

The king's crown was a newly introduced piece, and his long silver sword was new as well.

The skeleton made its debut in three sets of this theme.