The Crusaders were one of the various factions of LEGO's Castle theme. The first sets that involved Crusaders first appeared in 1984. The last regular appearance was in 1992.

One of the first sets of the Crusaders included a castle (6080 King's Castle), which was considerably bigger than its counterpart from the Falcons (6073 Knight's Castle). During the following years the Crusaders would grow to one of the biggest Castle-themed factions ever, with at least one release in every year from 1984 to 1992, a tally rivaled in number only by the Black Knights or the later Crown Knights.

As contemporary factions, Crusaders and Black Falcons were shown to engage in peaceful competition with each other, as seen in 6021 Jousting Knights from 1984, as well as in military conflict, as seen in 6062 Battering Ram from 1987. Both sets were the only ones were the two factions appeared together, except for the Accessories sets. Another set where the Crusaders appeared with another faction was 6060 Knight's Challenge from 1988, this time with the Black Knights.

Crusaders also featured many halfway civilian buildings, 6040 Blacksmith Shop (1984) and 6067 Guarded Inn from 1986, which was one of most popular Castle sets ever and also the first one to be reissued as part of LEGO's Legends line in 2001 as 10000 Guarded Inn.

After the advent of the Forestmen in 1987, it was implied that the Crusaders were at odds with these newcomers, since a Forestman appeared as a prisoner in 6042 Dungeon Hunters and a lone Crusader was seemingly attacking 6077 Forestmen's River Fortress in 1989, which was the last guest appearance of the Crusaders in a different theme. 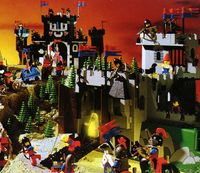 King's Mountain Fortress in a catalog from 1990 with Black Monarch's Castle in the background.

A second castle was added in 1990, 6081 King's Mountain Fortress, which was the first castle ever built on a raised base-plate. This set's release marked more or less the beginning of the end of this theme, since the small catapult from 1991 and the last Crusaders set, 1463 Treasure Cart from 1992 did not appear in any catalogs.

Although it has always been implied that there was some kind of king, there was never a distinct minifigure that filled this position. The first king minifigure would not appear until the introduction of Royal Knights in 1995.

Their fleet was only comparable to the one of the Black Knights and comprised a larger rowing boat (6049 Viking Voyager) and a smaller sailing boat (6017 King's Oarsmen). 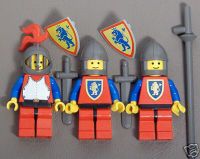 The symbol of the Crusaders is an upright lion with a crown on its head. This symbol was featured on shields which were available in two variants with either a golden lion on a blue background or a blue lion on a yellow background. There was also a unique red flag piece with the lion crest on it which was only available in 6041 Armor Shop.

Some guards of the Crusaders had the lion crest emblazoned on their torso pieces, while others had a crest with crossed axes. The axe crest was already present in 6080 King's Castle from 1984 and was last seen in the two Knight's Challenge sets from 1988.

There were also horse barding pieces with the lion symbol.

According to a catalog from 1992, "The Crusaders are the bravest knights in the kingdom. They are the protectors of the innocent and the keepers of justice." This is the only official word on the matter.

Some have noted that if the Forestmen are meant to represent Robin Hood and his merry men, then the Crusaders would be analogous to the army of King Richard I, AKA King Richard the Lion-Hearted, who participated in the crusades and supposedly lived during the same time period as Robin.

(*these sets include Crusaders with crossed axes on their torso pieces)