6081 King's Mountain Fortress is a Crusaders set released in 1990. The set contains a castle with a princess, two knights on horses, four guards and a ghost. This was the second and also the last major castle of the Crusaders after 6080 King's Castle from 1984. 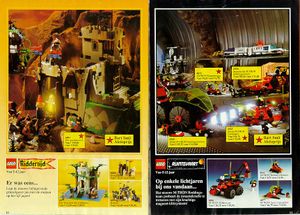 The King's Mountain Fortress set of 1990 was built on the raised Baseplate, which had debuted the year before with the Pirates collection's 6276 Eldorado Fortress. The structure was manned by four guards and two knights on horseback, and was further inhabited by a glow-in-the-dark ghost and a princess, who was the first Castle theme mini-figure to feature a face that was not a classic smile. The princess also pioneered the use of a 2x2x2 slope brick as the skirt of her gown. An exclusive black bird and a couple of trees, one built from parts of a palm tree, were also present.

In the bottom of the pit is a staircase. It leads down to a treasure room, in the middle of which is a sole treasure chest. The plate that it is on can be lifted. The section is mostly Old Gray. Since this is an older set, Gold Coin parts had not been invented yet so they used "pips" (1x1 round plates). Around this room is a castle battlement-style wall. The door to the room is a jail-cell style door. The walls have many large window spaces. On the second floor is a trap. It is activated by pulling a TECHNIC axle out from the wall. There are cage bars in front of the trap which can flip open. To the side of it is a balcony overlooking the entrance to the gold chamber. There is a torch on the balcony. The room connects to the battlements on the top with a small plate. The room is covered by another set of battlements. On top of these are two flags and a double crossbow. 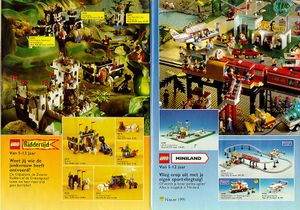 The path up to the castle starts with a walled area. The battlement-style walls are connected down to the side with arches. There is also a TECHNIC pin to attach it to other buildings. Around the entrance are the walls. There is a balcony on the side of which is a spear. The bridge can be drawn up to prevent entry to the castle. There are also two large doors. Overlooking this section is a battlement. There are a few trees throughout the castle areas. The drawbridge is controlled with a string winch.

The King's Mountain Fortress is one of the Crusaders' castles.