6082 Fire Breathing Fortress is a Dragon Masters set released in 1993. It contains a castle, Majisto the sorcerer, a knight on horseback, four guards, a Wolfpack bandit and a Dark Green dragon.

The Fire Breathing Fortress is built on a raised baseplate. There is an uphill path which leads to a double door. The doors can open and close. Over it is a dragon-painted arch. The castle area centers around a pit. On one end there is a jail cell. Near is is a window and a staircase up to a second floor. There is a treasure chest nestled inside a wall area. Growing from one corner of the walls is a tree. Parallel to the path is a cage door for the castle. It can open and closed to let the dragon in and out. 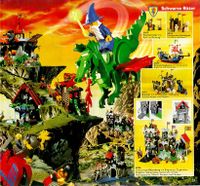 A 1993 Catalog Page from Germany with the Fire Breathing Fortress

The second floor is smaller than the first. It has a trap where if you pull out a part the floor will dump intruders into the pit with the dragon. The second floor area is ringed with battlements. There is a third level with a balcony- below it is a small room. Atop it's roof is the Dragon Masters flag. There are two halberds and a spear on the walls.. A brick-built dragon is place on a part coming out of the second floor that overhangs the entrance. The dragon is black, it's jaw can be opened and closed, it has fire, and it's wings are red.

The Fire Breathing Fortress comes with 6 Minifigures. Majisto is blue and wears a blue wizard hat and cloak. He has a beard and there is a pouch in his belt. The Yellow Dragon Master wears a Dragon Helmet with Dragon Plumes, has a Dragon Cape and on his shirt is an image of a fire-breathing dragon. He has an orange beard and sideburns. The Dragon Soldiers have a similar but less fancy dragon on their shirts. They wear helmets and have moustaches. The Dragon Archer is the same as the Dragon Soldiers except it has a quiver and a different helmet. Lastly, the Wolfpack bandit has a brown wolf shirt, black legs, and a Wolfpack hat. He has an eye patch.