This theme shares no content with the Knights' Kingdom theme from 2000, other than its medieval setting. 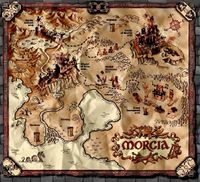 A map of Morcia, as seen in the instruction booklets.

This second Knights' Kingdom line from 2004 was a radical departure from previous Castle themes. Instead of using medieval knights and castles (and bandits), it centered around individual characters; four colourful knights (in red, green, purple and light blue) as main characters, pitted against the evil knight Vladek. The conflict took place in the fictional kingdom of Morcia.

Each knight had a special ability and a unique crest. Initially, the good side only featured four knights and a king until 2006, when Sir Kentis lead a group of four unnamed knights against a small army of foes in 8813 Battle at the Pass. Vladek's minions, the Shadow Knights, were formerly knights of Morcia who were transformed by Vladek's use of the power of the Book of Morcia. They reverted to their previous form after the defeat of Vladek, which led to the use of Rogue Knights as Vladek's new soldiers in 2006.

The standard LEGO System sets were accompanied by the release of canned action figure versions of the main characters in a style similar to BIONICLE. Most of the action figures (and some regular sets) came with special cards that could be used to play a battle game.

Knights' Kingdom II was more story oriented than previous Castle themes and had multiple books, online games, and comics, and even a video game.

Knights' Kingdom II introduced many new parts. The swords of knights were new, as were the visors for the four main knights and Vladek. The shields also had a new insignia, with a new shield for each knight and Vladek. Lastly, they all had new armor bearing their colors and a pattern.

Plastic Figures released in 2004 were Nestlé promotions. The figures had studs on them, and had 4 pieces. They also had stickers to put on the shield and body. They were almost twice as big as LEGO Minifigures.

The kingdom of Morcia was in possession of several castles, most of which where released with the first wave in 2004. The largest of these castles was the royal Castle of Morcia itself. Other fortifications included the Citadel of Orlan and Jayko's castle of Talonjay. The antagonist faction, led by Vladek, had three large buildings at its disposal, all of which were released in 2005. Their main stronghold was Vladek's Dark Fortress, which was also the largest of all Knights' Kingdom II sets. Other buildings included a fortified port included in 8802 Dark Fortress Landing and Scorpion Prison Cave.

In 2006 another group of buildings was released. The Mistlands Tower was the largest and the only one that featured characters from the previous years. The other buildings in 2006 included the Gargoyle Bridge and a large wall featured in 8813 Battle at the Pass.

It was originally planned for each knight to have castles based on the animal on their heraldry. The concepts briefly appeared on the official website, but were replaced with images from the card game, which weren't animal themed, althoguh the animals could still be seen in the Book of Morcia.[1] 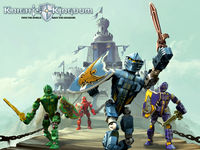 The heroes of Knights' Kingdom: (from left to right) Rascus, Santis, Jayko and Danju.

Seven characters were introduced in 2004. They were featured as normal minifigures in the sets as well as canned action figures.

In 2005, where the four knights were given magic-enhanced armour, the armour took a different shape with a molded shape on the torso instead of bricks as part of the armour. In 2006, Danju, Santis, Rascus and Mathias did not appear in any further sets, but Jayko and Vladek stayed as recurring characters.

Seven other characters were added in 2006.