Cookies help us deliver our services. By using our services, you agree to our use of cookies. More information
Navigation
Actions
Reviews
Fan space
ShoutWiki messages
Wiki tools
From Brickipedia, the LEGO Wiki
(Redirected from Jack Stone)

This article is about the theme. For the character, see Jack Stone (Minifigure).

Jack Stone is a theme that was introduced in 2001 and discontinued in 2003. The theme's most notable feature is its larger, more detailed minifgures. The sets have a strong civic action theme with Jack Stone himself acting in various rescue roles such as a policeman, fireman, workman, coast guard, and pilot. The theme was replaced by 4 Plus, which retained the adapted minifigures but reduced the focus on Jack. 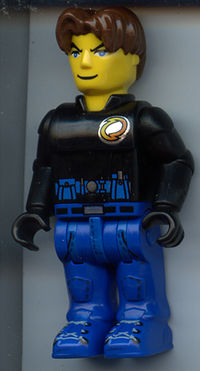 The Jack Stone minifigure from 4604 Police Copter. Unlike regular minifigures (but similar to the DUPLO figures), the legs, torso, head and hairpiece are not able to be separated.

The Jack Stone theme was introduced in 2001 alongside the similar, Basic-like theme Creator. Jack Stone acted as the basic replacement for Town Jr. and City Center's juniorization by introducing larger figures, and keeping some of the previous juniorized elements as well as adding some new ones. It could be counted as the missing theme between City Center (1999-2000) and World City (2003-2005). There was also several toothbrushes and a video cassette that were based on the theme. It was initially a strong seller, but was replaced by 4 Plus in 2003. Despite having his theme replaced, Jack Stone was still a character in 4 Plus.