Agents is a theme introduced in the Summer of 2008 and continued into 2009 as Agents 2.0, and is now discontinued. It involved an elite team of secret agents using high-powered technology to thwart the plans of an international crime syndicate led by Dr. Inferno.

Sets in the line typically contained elements from both factions in action against each other - members of the Agents, a top secret commando team tasked with investigating and preventing international crime; and the evil Dr. Inferno and his ranks of equally-maniacal associates. Each side had access to top-of-the-line technology, ranging from the minijets and mobile command units of the Agents to the ingenious weapons of destruction and mayhem devised by Dr. Inferno.

The Agents line is heavily inspired by the movies of James Bond and is an over-the-top parody of action-packed spy thrillers in general.

The logo of the Agents subtheme, Agents 2.0

Sets in the theme normally include an Agents vehicle and an Inferno structure or Inferno vehicle. The Agents vehicles typically feature a blue and grey colourscheme, while Inferno vehicles normally feature an orange and black colourscheme. Sets including contending vehicles normally centered on the vehicles contending for artifacts or treasure, such as the gold bars in 8630 Mission 3: Gold Hunt. Agents minifigures wore suits that were primarily blue, with decorations in grey and lime green. Agents' heads were normally double-sided, with one side featuring a headset, and they were led by Agent Chase. Inferno's henchmen typically wore orange and black, and were normally mutated in some way or contained mechanical appendages, normally with over-the-top features such as is the case with Fire-Arm and Saw Fist. Agents 2.0, released in 2009, featured similar-looking vehicles and minifigures, but the focus of the sets shifted from exotic artifacts or treasure to city heists or attacks, and the Agents gained new chest armour.

The first wave of the Agents theme was released in June 2008, starting with missions 1-6. Missions 7-8 were released later that year in November, and Agents 2.0, featuring set names without numbered missions and a more urban setting, released one wave in the beginning of 2009. Agents was the first theme centered on espionage since Alpha Team, and the next espionage theme after it was Ultra Agents.

New elements that Agents was responsible for introducing mostly included minifigure parts, such as Break Jaw's helmet, Dr. Inferno's hairpiece, and the torsos featuring mechanical arms used by Inferno and many of his henchmen. The latter two appeared fairly frequently in later themes. 8633 Mission 4: Speedboat Rescue also introduced new sharks with larger mouths and a more menacing appearance than previous LEGO sharks, though these only saw a later use in 6243 Brickbeard's Bounty.

An elite team of not-so-secret-agents, the Agents are an organisation based in LEGO City, led by Agent Chase. While they generally operate in LEGO City, they also operate internationally. Doctor Inferno is an evil genius who tries to take over the world and bring the Agents to an end. He rose up and created his own organisation and hired many henchmen, many of which were deformed, and enhanced them. His first known scheme was to send his henchman, Saw Fist, to steal an energy crystal; However, that plan was thwarted by Agent Chase. His next plan was to get his thug, Break Jaw, to bring him a treasure map from deep within a swamp. Agent Charge managed to steal the map back, but before he could get to it, Break Jaw escaped on his jet ski. Despite not having the map, Break Jaw informed Inferno of the location of the gold, hidden in a temple deep within a jungle. Inferno then sent Gold Tooth and another henchman to steal gold from the ruins for funds. Agent Fuse was able to recover the gold by firing a missile at Gold Tooth's truck, but the criminals escaped. Some time later, Dr. Inferno had Break Jaw execute Agent Trace by feeding her to cyborg laser sharks. However, Agent Chase managed to rescue her by trapping the sharks in fishing nets, firing his harpoon at the buoy she was suspended on and using it to get over to her. The Agents did not attempt to capture Break Jaw, instead leaving him behind in the stormy, shark-infested waters with only his jet-ski. Break Jaw again managed to escape. Spy Clops was later seen having a video call with Inferno on a laptop, which Agent Chase promptly stole. Using information on Spy Clop's laptop, Dr. Inferno was located and captured during a warehouse raid. He was incarcerated by the Agents in their Mobile Command Centre. However, he was rescued by Spy Clops and Gold Tooth some time later and escaped on a jet-ski.

After escaping, Inferno sent Break Jaw and Slime Face on a mission to recover sunken treasure, but that plan was presumably thwarted by Agent Charge and Agent Chase. After that, the location of Dr. Inferno's secret volcano base was discovered, and Agent Fuse made a solo mission to infiltrate it. However, Dr. Inferno, Claw-Dette, and Fire-Arm managed to capture Agent Fuse and planned to kill him. However, Fuse was rescued by Agent Trace and Agent Chase.

Dr. Inferno then contracted Gold Tooth to steal a golden statue from the LEGO City Museum, and delivered as usual. Afterward, Inferno sent Dollar Bill and Dyna-Mite to rob the LEGO City Bank; however, they were apprehended by Agent Fuse. Inferno then hired his friend, Dr. D. Zaster, to cover LEGO City in toxic slime using his Slime Chopper. However, Agent Chase destroyed the slime canisters, saving the city. Sometime after that, Agent Chase, Agent Charge, and Agent Swift discovered the Magma Commander's secret base and his legion of remote-controlled Magma Drones. Using their new Aerial Defence Unit, they destroyed the satellite dish controlling them, neutralising the threat and saving the city once again. After that failure, Dr. Inferno built a giant mech that he used to terrorise LEGO City. Agent Chase and Agent Trace managed to thwart his plans, but it is unknown what happened to him after that.

In this online game, released by LEGO in Summer 2008, you are an agent playing Missions 1 through 5. No storyline or plot is revealed in this game. The gameplay largely involved moving around the Agent's vehicle with your mouse, picking up power-ups and avoiding obstacles. At certain points during each mission, you would also have to perform tasks using your mouse separate from driving or piloting, such as shooting at the case containing the diamond's case in 8631 Mission 1: Jetpack Pursuit. 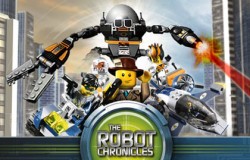 This online game is a combination of LEGO City, Racers, and Agents 2.0. It features Dr. Inferno in his robo attack suit terrorising LEGO City, and the robo attack, as well as the process leading up to Inferno's construction of the suit, plays fairly heavily in the game's storyline. In addition to playing as City or Racers vehicles, players may also play as Agent or Inferno vehicles throughout the game.