Alpha Team is a theme released in 2001. It centers around a team of secret agents known as the "Alpha Team", and their efforts to stop the nefarious villain known as Ogel from taking over the world. The theme's first main run was from 2001-2002, when its first two subthemes, the first an unnamed subtheme set in an urban environment and the second called Mission Deep Sea, were released. The theme was put in a brief hiatus in 2003, but then, returned in 2004 with the advent of its third and final subtheme, Mission Deep Freeze. The theme was discontinued in 2005.

The very first Alpha Team consisted of seven members: Dash Justice (the team leader), Cam Attaway, Flex, Radia, Charge, Crunch, and Tee Vee (a robot resembling a television set with legs). The first wave also consisted of three antagonist minifigures: Ogel, the primary antagonist, and two Skeleton Drone minions. Each Alpha Team member, as well as Ogel, had a distinct colour theme to them, such as red for Cam and grey for Dash. 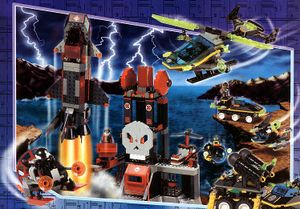 A 2001 catalog page of the first wave of sets released

Mission Deep Sea was released the following year and took the characters into the depths of the ocean. The colour scheme for the characters' vehicles remained mostly the same. A transparent neon yellow was added to Ogel's vehicles while the Alpha Team had shades of grey added to their vehicles.

There were three mutant animals controlled by Ogel: 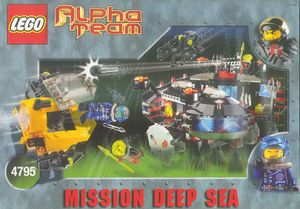 4795 Ogel Underwater Base and AT Sub was the first set to have both heroes and villains (Dash and Ogel respectively). The sub was a small vehicle with a large cockpit. Ogel's base was curved and black, with blue windows and red highlights. It had propellers on the roof and several grey cones holding the vehicle above the ocean floor. The vehicle had a large skull-shaped head at the bottom. The interior had a trident and a few mind control orbs.

In 2004, Alpha Team was massively revised. The theme's logo was changed, many of the characters had different appearances than in previous years, and Cam and Crunch were omitted in lieu of Agents Arrow and Diamond Tooth respectively. Other changes included Tee Vee becoming a humanoid robot, and Ogel's hook colour changing from red to blue. Alpha Team vehicles were given a new feature, known as Alpha Mode, which allowed them to be transformed into another vehicle without disassembling them. The Alpha Team vehicles' colour scheme was also completely redone, featuring black, greys, white, and sand blue, as well as various transparent colours for smaller details. Ogel's vehicles were similar to the previous subtheme in colour, but the transparent yellow is replaced by transparent blue. 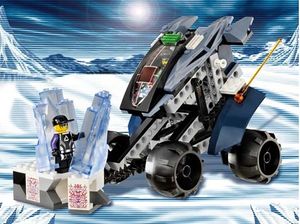 2005 saw the end of the theme and the release of two sets. The theme's story concluded with the main vehicles of the sets facing off, and left the outcome of the fight to the imagination. 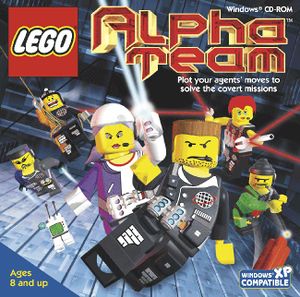 The cover for the Alpha Team video game.

A video game was released in 2001, in which Agent Dash was tasked with rescuing the other Alpha Team members from Ogel and stopping production of the mind control orbs. As he rescued each Agent, these Agents could be used in certain later levels. The last level, "Mission Control", involved stopping Ogel's Boggle Rocket from takeoff in order to deny Ogel world domination. The original Alpha Team video game was developed for LEGO Media by the award-winning special effects company Digital Domain. When the original video game was in development, its working title was "LEGO Logic," and the team was called "TILT (Trans-International LEGO Team)".

There were several online games centered around the events of this theme, made using Macromedia Flash. 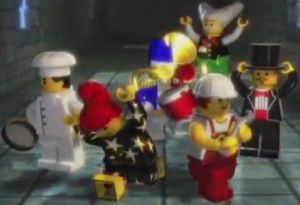 Alpha Team began as a video game developed by Digital Domain (which found success after creating Barbie Fashion Designer for Mattel), with the working title "LEGO Logic". Digital Domain pitched five different concepts to LEGO Media; LEGO racers, a virtual LEGO set, LEGO robot builders, a LEGO adventure, and a LEGO contraption builder. LEGO already had a number of the other ideas in development, so they chose the contraption-builder. Digital Domain began producing a game that mixed and matched various themes. The team of protagonists was named the Trans-International LEGO Team, and consisted of a chef, a gymnast (named Flip), a magician, a mad scientist (Dr. Pogo), and a marching band musician (Major Minor). The chef had the ability to flip things in his frying pan, Flip would provide spinning motion, the magician could teleport, Dr. Pogo bounced around (he was going to be a rubber minifigure instead of plastic because of this), and Major Minor would provide forward motion. The game had many characters at one point in development, such as a cowboy sitting at his campfire. If something lit his fire, he’d start cranking his spit (functioning as a fire-activated motor). The locations were based off household items such as refrigerators, dog bowls, and toasters. The names for the locations were: Aromazona (took place in a flower pot); Mt. Fridgy (took place in a fridge with the contents as platforms, and was the home of Neanderthaws, unfrozen cavemen-type creatures, with a boss battle against "Ol' Blue Ice"); Roller Toaster (had roller coaster cars which looked like bread and get dipped in lava, and a boss named King Crusty); and Poodle Dreamland (which took place in a dog pool, with a poodle named Flea-Flea as the boss).[1]

The LEGO group was not impressed with the pitch, as they didn't think the "mix and match" aspect fit their marketing scheme. With only six months of development time remaining, LEGO asked for the game to be turned into a spy-related game for boys. TeeVee and Ogel were the only characters from the original game to stay. Then the game was released in 2000, a year before sets were released. The plot and characters were all created by Digital Domain for use in the game. LEGO then turned what Digital Domain produced into real sets. 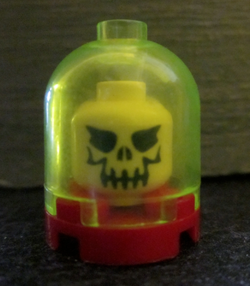 In this first year, as in all others, the Alpha Team attempts to thwart the plots of an evil criminal mastermind named Ogel. In his first bid for world domination, Ogel utilized an invention known as "Mind Control Orbs". These orbs turned people into mindless Skeleton Drones that Ogel could command. According to one online game "Evil Music", Ogel could also control weather and create storms using a special organ. Ogel was eventually defeated, and the orbs were destroyed, reverting all of Ogel's victims back to their original state.

The following year, Alpha Team had to battle Ogel and a new army of Skeleton Drones underwater. Also, Tee Vee became a mini sub. This time, Ogel created a new type of Mind Control Orb, which mutated sea creatures to do his bidding, and used these on many creatures, such as octopi and killer whales. To combat Ogel, Alpha Team went after him underwater, armed with a plethora of new vehicles. Ogel was finally defeated when Dash reversed the controls of Ogel's orb-manufacturing plant, causing all of the mutant creatures to revert back to normal.

Alpha Team did not advance in story in 2003, but in 2004, it continued. Ogel had a completely different plan, in which he was using his new Ice Orbs to freeze the world. The new Alpha Team tracked him to Antarctica, where he succeeded in freezing Alpha Team, the rest of the world, and even time itself. The Team were saved by Zed, an Alpha Team special agent, who was protected from the time freeze by his vehicle, which was equipped for such an event. He defrosted the Alpha Team agents, and then battled Ogel's Scorpion Orb Launcher. The LEGO Magazine invited members to send in submissions of what they thought would happen in the battle, although they were ultimately not published in the magazine, and members did not see the end of the battle. It is generally assumed that Zed defeated Ogel.