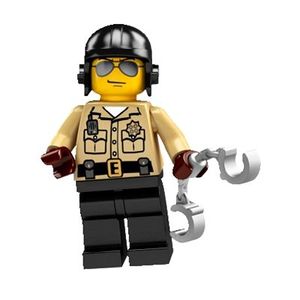 A traffic policeman in Minifigures series 2.

This article is about the LEGO City subtheme. For the Space subtheme, see Space Police.

Police is not an official theme in its own right but one of the recurring organizations that is featured in LEGO Town and City as well as several other related themes and subthemes. 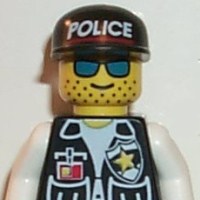 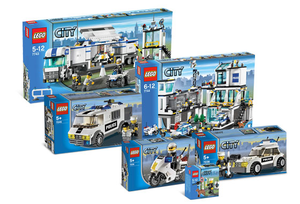 Police sets were already present when minifigures did not yet exist. The first one being 354 Police Heliport. When minifigures were introduced in 1978 three police sets were among the first to be released with them. The police was equipped with a headquarter and several vessels. Some of the early sets (621 Police Car and 6600 Police Patrol) featured police cars that could not be entered by the minifigs due to the difference in scale. New buildings were introduced in 1983 and 1986. 1985 saw the release of 6450 Light & Sound Mobile Police Truck which was one of the first two sets to feature 9V battery boxes and electric light and sound bricks. In 1988 6642 Police Helicopter was the first police set that included a modern helmet with visor.

1993 brought some major changes. The minifigs got the first new police torso pieces since 1978. They featured a new police logo with a five-pointed star instead of the simple white badge. It was also the first time that LEGO policemen got new head pieces that differed from the original smiley faces. All Police sets were now released as part of the Rescue subtheme until 1998. New buildings were released in 1993 and 1996.

In 1998 the Town theme was replaced with the "juniorized" Town Jr. and the police sets of the following few years used heavily simplified building techniques. The sets also featured transparent green window pieces instead of clear or blueish ones.

New police sets were introduced in 2003 as part of the new World City theme. The police logo now featured an eight-pointed star inside a police badge. New uniforms were introduced as well. Another change involved the lightbars of the police cars. They had now red and blue beacons instead of just blue ones. The windows were now smoke coloured.

Police appeared in Spider-Man theme in 2003 and 2004 as well. Police vehicles with American style were included in two sets.

Beginning with 2005 the police sets were released as part of the City theme. The police units went back to flashing lights that were blue only. Also the first police dogs were introduced. Instead of preprinted pieces that are labeled "POLICE" the new sets include sticker sheets that allow to label the police units with either the English word "POLICE" or the German "POLIZEI". In 2012, City relocated to a forest-like area and the police started wearing tan-colored uniforms with dark blue pants, some come with a new ranger hat, making them the Forest Police and Forest Rangers.

Police is also appeared in LEGO Batman: The Videogame, but they only appeared in Batmobile and the Two-Face Chase and an actual minifigure of Commissioner Gordon.

In 2013, Chase McCain is created for LEGO City Undercover.

In 2014, a new uniform was created for the Lego City police.

In 2016, Prison Island Police was launched.