This article is about the animal. For the wood toys, see Dog (disambiguation).

Dogs are animals that have had several different appearances in a wide variety of LEGO themes since 1976 and as recent as 2013. Since they were debuted in the early 1900's, there has been a wide range of variations of the piece.

The earliest appearance of a dog was when the Wooden Toys were around and two wooden dogs were made. One was called Dog (Hund) and the other wood toy was called Terrier (Hund). They also released a set called Wooden Pluto based on the Disney character, Pluto.

The earliest appearances of a dog as a plastic LEGO brick was in the DUPLO set 082 LEGOVILLE. Not much more than a white brick attached to a black brick and printed with a dog's face, dogs since then have taken much more detailed forms, ranging from the canine residents of Fabuland, like various buldogs and Dr. Dog, to the highly detailed DUPLO version of Disney's Pluto and the realistic animals seen in many City sets. Currently there most recent variations have been in the City theme: a German Shepherd variation introduced in 2011, a Dalmatian variation introduced in 2013 and a Chihuahua released also in 2013.

Even before the standard dog was introduced, the 2001 Harry Potter set 4706 Forbidden Corridor had featured a multipart model of Fluffy, the enormous three-headed guard dog. The standard System dog first appeared in 2004. Initially exclusive to the Harry Potter theme. When appearing with the Harry Potter theme it was representing Sirius Black. Eventually it appeared in the City line in 2006 and has featured in many sets, particularly as a police dog. It was solid dark grey then solid brown with concave eyes and no printing.


In 2011 it was replaced by a new, more detailed mould with longer triangular ears and printed eyes and nose. Its body colour is nougat with black spot on its nose which is supposed to resemble a German Shepherd (Alsatian). In 2013, a new version (white with black printed spots) representing a Dalmatian will appear in the City theme.

In 2013 a new mould of a chihuahua appeared in 10th series of Minifigures (theme) as a trendsetter's accessory. This dog is a one-stud brown figure in sitting position with large printed eyes and nose. It has distinctive pointy ears.

A new mould for a Husky appeared in 2014 as a part of the City theme.

In the summer of 2015, a Great Dane was introduced for Scooby-Doo.

The grey stone dog is a playable character in LEGO Pirates of the Caribbean: The Video Game as a guard dog. It is able to dig, and bites as a defense tactic. 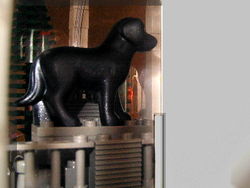 The first Belville dog was introduced in sets in 1994, and joined the following year by a smaller puppy. Both were originally plain, but later sets would feature versions with printing. In 1998, Scala introduced new dogs and puppies that had even more detailed, multi-coloured printing patterns for different dog breeds.

For this theme three different dog moulds were introduced so far. In 2012 a long-eared puppy called Scarlett was released as well as a puppy with raised ears, which comes in different colour variations. In 2013 a new poodle was released in two variations. 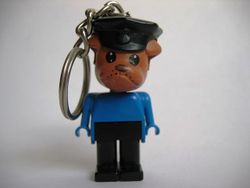