Cookies help us deliver our services. By using our services, you agree to our use of cookies. More information
Navigation
Actions
Reviews
Fan space
ShoutWiki messages
Wiki tools
From Brickipedia, the LEGO Wiki
(Redirected from Raptor) 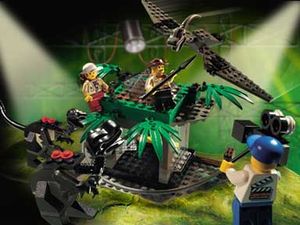 The first version of the Raptor was released in 2001 with the 1370 Raptor Rumble Studio from the Studios subtheme Jurassic Park III. This version was made of common parts.

The second version of the raptor was released in 2005 into the Dino Attack and Dino 2010 themes. The new figure was made of all new parts and came in only black with a yellow underbelly. It consisted of six seperate pieces. 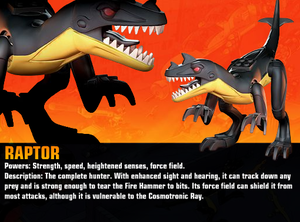 This version of the raptor has heightened senses, great agility and a huge amount of strength, as Raptors can rip Fire Hammers to bits in no time. The creatures emit an energy field that most weapons cannot pass through. One of the few weapons that can hurt a Raptor is the Cosmotronic Ray.

The Raptor was boxed in the 7474 Urban Avenger vs. Raptor set, along with the main vehicle and Shadow. In Europe, the set was released as a Dino 2010 set, the 7295 Dino Buggy Chaser, the weapons being replaced by capture gear.