The Triceratops (Try-sare-a-tops) is an animal dinosaur figure. Various incarnations and versions of the Triceratops have been released since 1997.

A DUPLO triceratops released in 1997

The first Triceratops figures appeared in 1997 in the preschool targeted DUPLO line. The figure was part of DUPLO's new Dino and Dino (Dacta) themes. The figure was only one single piece with no movable parts.

A smaller version of the figure was also released as a baby triceratops. 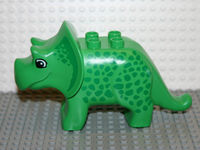 A DUPLO triceratops released in 2008

In 2008 a new version of the DUPLO triceratops was released. It was similar to the old one, with new printings.

The first Triceratops of System was released in 2000 with the Adventurers subtheme Dino Island. The figure had four parts: The horns, the head, the body and the tail. It is built like a crocodile but the head has a clip to hold the horns.

Two colours were available: One with brownish-orange legs and one with light grey legs.

Another Triceratops was released in 2001, as part of the Dinosaurs theme. It was available in the 6722 Styracosaurus set, as an alternative model. This Triceratops was different to the first one. It had completely new parts, and its colour was sand green instead dark grey.

A new, updated version of the Triceratops appeared in the Dino theme.