The Pteranodon (Ter-an-oh-don) is an Animal minifigure. Since the first Pteranodon was released in 1997 in DUPLO, various incarnations and versions of the Pteranodon have been released. 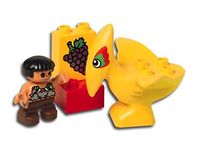 The first Pteranodon figures appeared in 1997 in the preschool targeted DUPLO line. The figure was part of DUPLO's new Dino theme, and was only one single piece with no movable parts.

A smaller version of the figure was also released as a baby pteranodon.

2008 saw the reintroduction of Duplo's Dino theme, with a new Duplo Pteranodon figure which was similar to the first one, with new printings.

2000 came the release of the Adventurers sub-theme Dino Island, which featured the first Pteranodon minifigure made specifically for LEGO Systems sets. Pteranodons were released in red, orange, dark orange and tan. It consisted of a single piece. It also appears in various video games. LEGO Island 2 features it as a mount unlocked afer completing Adventurer's Island. In the LEGO Island Xtreme Stunts video game, it can be seen flying around Space Mountain. In LEGO Racers 2 , it can be seen flying on Dino Island. 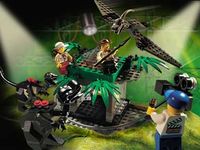 A new Pteranodon was released in 2001 with the Studios subtheme Jurassic Park III, with the set 1370 Raptor Rumble Studio. This version of the animal was made of common parts.

With the release of the Dino Attack theme in 2005, came yet another brand new version of the Pteranodon. The new figure was made of all new parts and came in only black with a green underbelly. It consisted of six seperate pieces.

A green Pteranodon from the Dino theme.

A new, more realistically coloured and proportioned version of the Pteranodon has been released in the Dino theme. They were released in 2012. Interestingly, these Pteranodons are to-scale with a minifigure.

Two versions have been released, a dark tan/dark red one and a dark green/sand greenish tan one.