The Tyrannosaurus rex, or T-rex, is a LEGO Animal dinosaur, usually made of multiple parts. Since the first T-rex was released in 1997 in DUPLO, various incarnations and versions of the T-rex have been released since.

The first T-Rex figures appeared in 1997 in the preschool targeted DUPLO Theme. The figure was part of DUPLO's new Dino theme, and was only one single piece with no movable parts. The original DUPLO Tyrannosaurs only came in red, and in two sizes: an adult T-rex, and a baby T-rex.

In 1999, blue coloured baby DUPLO T-rex were made available in the sets 2803 Dinosaur Babies and 2821 Dinosaurs Fun Forest.

A green coloured DUPLO T-Rex was produced in 2002 for the set 3615 Theatre Stories.

2008 saw the reintroduction of DUPLO's Dino (DUPLO) theme, but with a new DUPLO T-rex figure which was more articulated, with movable parts. The new DUPLO T-rex was produced in dark red and green.

2000 saw the release of the Adventurers sub-theme Dino Island, which featured the first T-Rex figure made specifically for LEGO Systems sets. The figure consisted of five movable parts, including arms originally used for the Dragon minifigure. A new head, tail, and body piece were made specifically for the new theme and the figure would only be produced in green. The T-rex would go on to be used in the Studios set 1349 LEGO Studios Steven Spielberg MovieMaker Set and two sets related to Adventurers theme. Two of these Tyrannosauruses appear in the video game LEGO Racers 2 running around Dino Island. The T-Rex also appears in the video game LEGO Island 2.

In 2001, LEGO released its Dinosaurs line, which consisted of new dinosaur figures made of new interchangeable movable parts which could be mixed and matched to create different species of dinosaurs. The set 6720 Tyrannosaurus featured a new incarnation of the T-Rex utilizing brand new parts, as well as the same head and arm pieces from the previous T-Rex minifigure, as well as Part:6027 as it's tongue. The figure also came with a fin piece which could be connected to it's back to make it resemble a Spinosaurus. The new T-Rex was much bigger than it's predecessor and was coloured sand blue instead of green.

In 2001 the same T-Rex figure would be utilized again in the Jurassic Park 3 set 1371 Spinosaurus Attack, but as a Spinosaurus, with a fin attached to it's back. The figure was coloured dark grey instead of sand blue.

With the released of the Dino Attack / Dino 2010 theme in 2005, came yet another brand new version of the T-rex. The new figure was made of all new parts and came only in two different versions: one, black with a green underbelly, and one black with a red underbelly. 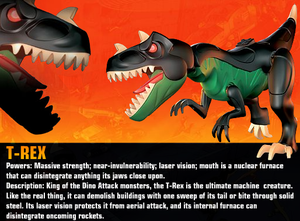 T-rex Story in Dino Attack: T-Rex is the King of the Mutant Dinosaurs, having several abilities. These include laser vision, plasma breathing, mouth radiation/heat, and the ability to bite through steel. As if not that was not formidable enough, the T-Rex also is extremely strong; a single sweep of its tail can knock a building over.

In 2012, a new version of the T-Rex is released in the theme known as Dino. It appeared in the sets 5886 T-Rex Hunter, and 5887 Dino Defense HQ. Like in Dino Attack, there are 2 differently coloured versions of the T-Rex in this theme.