Paradisa was a subtheme of Town, that ran from 1992-1997. It included many pink-coloured bricks, along with other rare pieces, and was mainly marketed towards girls.

Paradisa sets were mainly focused on leisure and vacation, many sets consisting of scenes at the beach. Horseback riding and surfing were also a few other of the theme's main subjects. 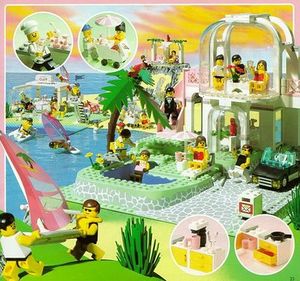 Unlike other themes of that era, Paradisa had an abundance of female minifigures, which were composed of several completely new parts that somewhat revolutionized the design of female minifigures. Parts like these included a new ponytail hair piece, three new faces, two with eyelashes and more delicate red lips than on the female head introduced with Pirates in 1989, as well as a face with freckles. There were also new torso pieces with strapped and strapless tops. The few male minifigures featured only two different types of heads, with either a moustache or dark sunglasses.

Paradisa sets were the first to feature the rare colours pink, dark pink, and lime green, and - except for white and old light gray - the sets were mainly composed of parts in these colours, and some of them were only available in Paradisa sets.