LEGO Games is a line of brick-built board games introduced in July 2009. Currently it comprises twenty-nine games, and thirty-three different sets. Unlike previous LEGO board game releases such as Chess or Tic tac toe, the LEGO Games line features original games developed by LEGO in conjunction with veteran designers from various game industries. It did not succeed in becoming a long-term sustainable concept for the LEGO Group, and was discontinued in 2014. 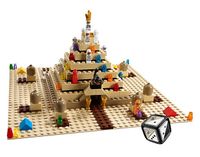 Ramses Pyramid is an iconic LEGO Games set, which features a pyramid made of LEGO bricks.

The LEGO Games theme uses standard bricks and building techniques in both construction and play, though two elements - the microfigure and the die - are both characteristic of the line and, so far, exclusive to it. The die is actually so intrinsic to the theme, that it is actually incorporated into the theme's logo. Most of the games feature a playing board that must be constructed, although some others use a number of standalone structures instead.

The LEGO Games release schedule differs greatly between the European and American territories. They are typically released in Europe in steady waves much earlier than in America, where they appear sporadically and, in some cases, not at all.

In 2010, games were introduced that were based either on actual LEGO licenses, or, in some cases, original themes. Examples include 3862 Harry Potter Hogwarts, and 3856 Ninjago.

In mid 2011, a subtheme of LEGO Games, Heroica, was released, which is based on the concept of role playing games, such as the iconic Dungeons and Dragons. The subtheme will see players exploring various environments such as forests and dungeons, collecting keys and battling monsters. The various games in the subtheme can also be combined with each other to form a larger playing area.

Microfigures: Some games feature microfigures to serve as tokens. These are single pieces styled to represent minifigures - some original, others based on existing minifigures - but are only one stud wide and two bricks tall, and have no moving parts.