This article is about the bumps on LEGO bricks. For the part commonly referred to as a stud, see Part:6141. 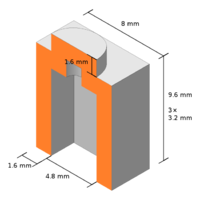 The dimensions of a LEGO brick with a stud.

A Stud is a small, cylindrical bump which is on top of many LEGO bricks that is used to hold together the brick above it. All studs of LEGO bricks have the word "LEGO" printed on them. Studs have a variety of purposes in LEGO sets and background material.

Studs are commonly used as a way to measure the size of a brick. For example, Part:3001 is named "BRICK 2X4", with the "2X4" referring to the fact that it is two studs wide and four long.[1] Bricks which do not have studs, such as flat tiles, are still measured using studs as a unit.[1] The part 6141, commonly referred to as a "stud", is a single round piece which is used in a wide variety of sets. This part has also had some use as a minifigure accessory, such as a personal holoprojector for the Star Wars-themed Sandtrooper, and three were used as juggling balls for the Court Jester from Kingdoms.

Main article: Minifigure Language
Studs have been seen to be used as the basis of a written alphabet for Minifigure Language. Up to five studs are drawn inside a box, with each of the twenty-six different formations corresponding to a letter in the English alphabet. 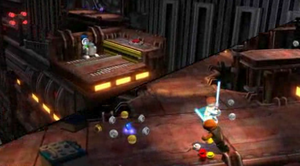 Since LEGO Star Wars: The Video Game, studs have been used as a form of currency in video games. Different coloured studs all have different values. Commonly, stud values remain consistent throughout the games:

However, there are exceptions, for example the GameBoy Advance version of LEGO Star Wars: The Video Game had studs values where silver studs were equal to 1, blue to 5 and gold to 10. Studs are used to purchase items such as unlocked characters, and red and gold bricks.

In LEGO Harry Potter: Years 1-4, new studs were added which served a different purpose. These transparent, light blue "ghost studs" formed a pather, and were used in the overworld to lead the player to their next objective. Typically, ghost studs had no value when the player ran into them, but a red brick can be purchased where the player can collect ghost studs which have a value of 1000 each. This system was also used in later games such as LEGO The Lord of the Rings: The Video Game. In LEGO Marvel Super Heroes, in addition to the standard blue studs, transparent red studs were also used with the trail left by a ghostly Deadpool. While the blue path lead to the next step of the story, the red path could be set by the player by choosing a location on the map that they wish to go to.

Main article: Message Boards#Stud Ranking
On an older version of the official LEGO Message Boards, studs were used to rank contributors by the number of their posts. Each user had eight studs, with each stud being either yellow or white. The more yellow studs a user had, the higher their rank.