“The Magic is Building!”
―The Official Tagline

LEGO Harry Potter: Years 1-4 is a LEGO video game based on the first four installations of the Harry Potter series in a LEGO form. The game was released on June 29, 2010, in the United States. It was released in the UK on June 25, 2010,[2] and was developed by Traveler's Tales (TT Games), the company that is responsible for most of the more recent LEGO video games. The hubs for this game are Diagon Alley and Hogwarts.

The Mac OS X version of the game was released on February 22, 2011 by Feral Interactive.[1]

The game was admitted to be in the works by Traveler's Tales in 2009, when a Trailer was released at Nintendo's E3 conference. This trailer was one of the only sources of information about the game until a second trailer was released, which involved gameplay and more characters, including old characters like Professor McGonagall and Professor Quirrell "revived" with flesh skin. This was called a Year 1 vignette. At present there are four vignettes, including Year 1, Year 2, Year 3, and Year 4.

Before the Year 3 vignette, the first 2 minutes of cutscenes which involved Harry arriving at number 4 Privet Drive and him getting his letters to Hogwarts was released.

Tie in with the sets[edit]

For the most part, the game features the minifigures from the Harry Potter sets. However, there are some minifigs that are essential to the storyline that have not been released in actual LEGO form, such as Petunia Dursley, Dudley Dursley, Percy Weasley, etc. Also, some characters like Professor Flitwick, Oliver Wood, and Argus Filch were released in sets after the video game, and the minifigures drew inspiration from their animated counterparts. Before the game, sets of Harry Potter were released for the first four movies and one set came out to accompany the fifth movie. Since this game will feature the first four movies, all the sets already created could be implemented into the game.

Warner Bros. Interactive Entertainment, which now owns Traveller's Tales, will be partly responsible for the distribution and publishing. They have already published many LEGO games, including LEGO Batman: The Video Game, LEGO Battles, and LEGO Rock Band.

The gameplay is similar to LEGO Indiana Jones. In the first level, The Leaky Cauldron, Harry can't use magic yet because he doesn't have a wand but Hagrid can since he is an experienced wizard. All Harry is able to do is smash objects by rolling into them until he learns his first spell at Hogwarts.

The game uses the new split-screen introduced in LEGO Indiana Jones 2: The Adventure Continues and is a co-op game, similar to all other Traveller's Tales LEGO video games. The new split-screen is a moving division on the screen in relation to where the characters are in the level. This makes finding your partner much easier than a stationary horizontal or vertical dividing line. 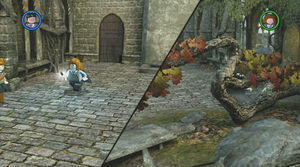 The Hogwarts castle from the game is notably the biggest LEGO video game environment ever created. There are many areas to explore, including the Great Hall, the covered bridge, Gryffindor and Slytherin common rooms, the courtyard, the quidditch field, Hagrid's hut, and more. Players can go to classes to learn new spells to advance to new areas in Hogwarts. An example would be if an area is covered by Mandrakes, the player might not be able to get to that place in Year 1, but after the player has covered that Herbology lesson, the player can get through there because they have learned how to get past them.

Potion-making is another vital gameplay feature. If there is a cauldron nearby the player must collect the right ingredients to put in it. If the player collects the right ones, they will get a reward or advance in the level. If they get it wrong they could likely be turned into a frog.

As with all schools, there are other students at Hogwarts who they can practice their defensive spells on. For instance, in the Gryffindor common room the player might find a student sleeping on a couch. Zap the couch and the child is eaten up and then belched out. But they can't do this with just anyone. Zap Professor Snape and the player might be turned into a frog again.

(Please note: There are 2 hubs instead of 1. They are: Hogwarts and Diagon Alley. Portable versions only have one hub- the Room of Requirement.)

The Face of the Enemy[edit]

The Chamber of Secrets[edit]

The Secret of the Egg[edit]

The game has been released in nine different versions with eight different set numbers:

* indicates the character is playable

Note that "spell wheel" contains both spells and abilites for characters. Some, like Filch, can not use magic but have a spell wheel with only the special ability slot. Note that "character list" refers to the way the characters appear on the character selection menu (right to left and top to bottom)

This adapts the Wingardium Leviosa spell into Crucio and adds Avada Kedavra as a spell in the green slot on the spell wheel. Crucio allows characters to preform magic on black objects with red sparks

These abilities appear in the green slot on the spell wheel (1 o'clock position) and can be activated by highlighting that cirlce and pressing the same button to cast a spell.

Harry recieves the Invisiblity Cloak mysteriously after "A Jinxed Broom". It was his father's cloak, and will turn Harry invisible.

A character's pet can go into pipes to solve a puzzle.

A character with this abillity can turn into an animal.

These are abilities that can only be activated when required.

All Hogwarts students can accsses their respective houses including some professors

Some characters can dig on brown mounds with blue pawprints above it.

Characters with this ability can pull orange levers

Characters with blue books on their sides can open cabinets with rune markings on them. This can be done by standing in front of them and pressing the Circle, Z, or X and then repeating the pattern.

Most characters are average at riding. Out of the trio, Harry is best.

Characters can handle Mandrakes after going to a cupboard with a lit circle in front and putting on earmuffs. Mandrakes can break glass and then be potted.

Ability to talk to snakes. Can open smokey doors from which a snake pops out.

Characters can turn back time to a previous version of the room they are in.