4736 Freeing Dobby is a Harry Potter set released on October 1, 2010. It is a remake of the set 4731 Dobby's Release from 2002. As its name says, this set recreates the scene from Harry Potter and the Chamber of Secrets where Harry Potter frees the house-elf, Dobby, from his vicious master, Lucius Malfoy, by tricking Malfoy into giving his slave an article of clothing hidden in Tom Riddle's diary. The set contains a small doorway that holds a broomstick and a spider, and includes the minifigures Harry Potter, Dobby, and Lucius Malfoy. 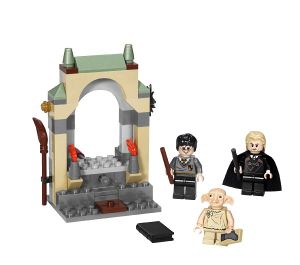 The main part of the set is a small doorway, which is probably meant to be a Hogwarts corridor or an entryway to Dumbledore's office. The archway has a few steps and a handle at the back that causes Lucius Malfoy (or any minifigure of the player's choosing) to be blasted forward, recreating the scene in the movie where Dobby sends him flying when Malfoy tried to attack Harry. One side of the structure has a broomstick and on the other is a spider. There is also a black book, which represents Tom Riddle's Diary, which can open up to allow a printed sock plate to go inside.

The minifigures included in this set are Lucius Malfoy, Harry Potter, and Dobby. All three minifigures are redesigned from previous versions, and Dobby's new variation has printed details on his head and variations in the colour of his body pieces. His head and arms are now flesh-coloured. The redesign of Dobby included is exclusive to this set.

This set is a remake of 4731 Dobby's Release, and thus has several differences from the 2002 set. In 4371, instead of a doorway there is a small room representing a corner of Hogwarts Castle. The previous set also does not contain Harry, and the Lucius minifigure is not flesh colored. 4731 also includes fewer pieces.

This is a description taken from LEGO.com. Please do not modify it. (visit this item's product page) With the help of Harry Potter™, free Dobby™ from his master Lucius Malfoy™!
Trick Lucius Malfoy into freeing Dobby, the house elf! Then use Dobby to protect Harry Potter and send Lucius flying down the hall with a magic blast as he tries to get revenge in this Harry Potter and the Chamber of Secrets scene.