4766 Graveyard Duel is a Harry Potter set released in 2005. The set depicts the scene in Harry Potter and the Goblet of Fire where Lord Voldemort is reborn and Harry duels him while the Death Eaters look on.

It includes a graveyard with various aspects, such as a rotting tree, graves, a cauldron, a shed, the grave of Tom Riddle Sr. with a death angel statue, snakes, and skulls.

The minifigures included are Harry Potter, Lord Voldemort, Peter Pettigrew, two White Skeletons, a Black Skeleton, a Black-and-Green Skeleton, and Lucius Malfoy with a double-sided face, one with his normal head and one with his Death Eater mask. 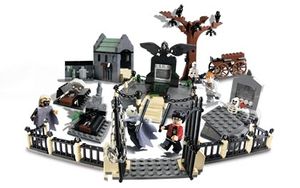 This set features a twisted old tree adorned with black owls and bats and a skeleton at the base. There are two small graves with tombstones and the main grave which features flowers and a skeleton that jumps out of it. There is also the main grave of Tom Riddle Sr. which has a death angel statue and snakes within the grave. This set includes the main gate of the graveyard, a cart for carrying coffins, and a small building with black and green skeleton and various graveyard equipment, like a broom, a shovel, and a water spigot. Included are two black owls, bats, and two black Norbert-esque creatures for statues on the graveyard gate.

The set includes four separate graves. The smallest of the four simjply consists of two slanted parts attached to hinges covering a few brown tiles (one of which is printed with the upper half of a partially disinterred skeleton). Behing the main section of the grave is a tombstone in the shape of a skull (although you can't see all it's features, even if the grave is opened fully).
The next-smallest grave features a black plate attached to a hinge covering a few brown plates (once again, one is printed with skeletal remains-this time the lower half of the body). Attached to the top of the plate is a headstone engraved with twisting designs. The stone has a stone bird set atop it.
The second largest (and also most elaborate) grave consists of a many bricks built on a plate, creating a small tomb. At the rear end of the structure is a large tombstone, with several letters in an unknown script carved on it, and a stone frog at it's peak. Inside the tomb rests a skeleton, attached to which is a lance element, which juts out of the side of the tomb. When the lance is turned, the skeleton pops out of the top of the tomb, bursting through its top, which is not connected to the rest of the structure.
The largest of the tombs is that of Tom Riddle, Lord Voldemort's father. It is built on grey plates, with slanted bricks giving the impression of a raised base. The grave area is fenced in, except for one spot at the front, where a series of steps leads up to it, and at the back, where access to it is blocked by the grave's large gravestone. At the end of the stairs to the tomb, there is a plate with green web-like designs on it. This is hinged, and underneath it is a hollow filled with snakes. Behind this rests a large gravestone, with "TOM RIDDLE" engraved on it. Above he name is a head-and-torso statue of what would appear to be Death. On either side of the stone is a small shrub.

A small crypt (or possibly a maintenance shed) is included. It has a Sand Green roof, and dark grey edging around it. A flight os steps leads up to the interior of the crypt. At the top of the stairs is a pit (covered with tiles) in which is stored a black-and-green skeleton. The outside wall of the crypt has a broom and shovel attached to it, as well as a plate attached to it by hinge parts. On the plate is a small wall, a tap, and a trashcan.

A tall brown tree is included in the set as well. It is taller than anything else in the set. Near it's base, a skeleton is strapped to it. It's upper branches, of which it has four, have owls and bats perched on them.
There is a small plate with a cauldron sat upon it included in the set. The cauldron has small shrubs surrounding it, and a fire built under it.
A fence protects the front of the set. It is primarily black, with tan columns placed upon it at regular intervals. In the centre of its structure is a large black gate, held shut with a padlock and chain.

The Minifigures included are Harry Potter, Lord Voldemort, Lucius Malfoy (with two faces- one with a Death Eater mask and one without), Peter Pettigrew (with his metal hand), and four skeletons: two white, one black, and a skeleton with a green body but black head and legs.

The set depicts the scene in Harry Potter and the Goblet of Fire where Harry is transported to a graveyard outside Little Hangleton, to help with the rebirth of Lord Voldemort.

This is a description taken from LEGO.com. Please do not modify it. (visit this item's product page) Harry faces the duel of his life!
Discover the hidden dangers of the sinister Little Hangleton graveyard! With graves that open, secret compartments, skeletons and snakes, this eerie set has many surprises in store. After Harry is chained to Tom Riddle's tomb, Wormtail™ summons the evil Lord Voldemort™! Will Harry defeat Lord Voldemort in a Wizard's Duel?