The set features four buildings: the Great Hall and 3 other towers. Each include different rooms and various magical surprises classic to the LEGO Harry Potter theme. It also includes a gray, brown, and white owl, a cat to represent Mrs. Norris, 2 snakes, a spider, a bat, a frog, a rat, the Sorting Hat, the Marauder's Map, the Sword of Gryffindor, and the 2010-redesign Invisibility Cloak. A noticeable feature of the new castle is that in between each tower is a modular section that give maximum flexibility by allowing the tower to be connected in any combination. In 2011 4867, another model depicting part of the castle was released. Also including this TECHNIC configuration, it was designed to be structurally combined with this set. 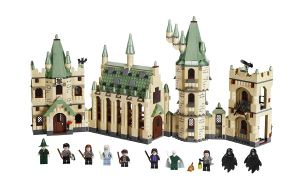 LEGO Shop image for the set in its entirety

While, as mentioned above, this Hogwarts sets has elements from every film, the designer returned to the first movie to capture the classic profile of the castle.[1] He was inspired by the first view of it as Harry crosses the lake on a boat, and this is evidence by the Great Hall section of the set looking very similar to its first appearance in the movies.[2] It made its first appearance at Toy Fair 2010 as part of the 2010 re-release of LEGO Harry Potter along with other new sets, and certainly had the most detail and features of any of the Harry Potter sets released that year.

The castle is made up of four main buildings: the Astronomy Tower, the Common Rooms, the Great Hall, and Dumbledore's Office. Each building has a modular section connecting it to another building, giving the set maximum flexibility and allowing the towers to be connected in any combination.

The Astronomy Tower houses the Room of Requirement on the bottom floor with a Vanishing Cabinet, which can open and close to allow the placement of a minifigure inside of it. The partner Vanishing Cabinet can be found in 10217 Diagon Alley. The middle floor contains the Restricted Section of the library, which houses three brown books which can be reached by removing the chains (actually flexible hand-cuff pieces) so that the clear panels of the cabinet can slide open. The top of the tower is the observation roof for Astronomy with a rat and a telescope that swivels in any direction.

The next building, known as the Common Rooms [3] contains four floors and represents (for the most part) the Gryffindor Tower as seen in the films. The bottom floor is the Slytherin Common Room, decorated with green snakes and black chairs. The floor above contains a rotating piece of furniture with a Suit of Armor on one side and Tom Riddle's diary behind it. The third floor is the Gryffindor Common Room, with two swiveling red chairs and a fireplace through which Sirius Black's head speaks to Harry. The top floor is the Owlery, which contains three owls (a grey, a brown, and a white) and some bird droppings scattered among them. The top of this tower contains the three small turrets coming off of it.

The Great Hall is the central building of the set. There are many changes from its previous design in 4709 Hogwarts Castle, one being that the ceiling is now made of pieces, whereas the original set had a cardboard ceiling. Either side of the building has transparent bricks for a stained-glass effect. There is a rotating candelabra fixture, and Gryffindor and Slytherin banners hanging from the ceiling. The interior of the hall contains two long tables (each with bench seating on either side), with a large roast turkey and a golden plate with cherries and a croissant on one and a large cake on the other. Both tables have golden goblets, and the front of the hall has two staff chairs and the announcement podium with two torches and two sloped tiles for the Sorting Hat to sit on. There are two crossed axes behind the professors' chairs.

The last structure to be built is broader and similar in design to 5378 Hogwarts Castle. The Hogwarts trophy room is at the base of the tower, and has portraits of Hogwarts Headmasters on the walls. The trophy room contains James Potter's Seeker trophy and a chest containing a parchment and the Philosopher's Stone. A spiral staircase leads up to Professor Dumbledore's two-story office, which has many pieces to explore, including two false-fronted cabinets that contain a letter and Basilisk fang. Other features of the office are potions, a magnifying glass examining the Daily Prophet, a frog, and a crystal ball. The Sword of Gryffindor hangs across the ceiling and within the roof piece is a stand where the redesigned Sorting Hat rests.

This is a description taken from LEGO.com. Please do not modify it. (visit this item's product page) Magic and mystery haunt the halls of the Hogwarts™ Castle!
The Dementors have the Hogwarts™ School of Witchcraft and Wizardry surrounded, and an epic battle between Harry Potter and Lord Voldemort is looming! Harry and Dumbledore face He Who Must Not Be Named while Professors McGonagall and Flitwick try to keep the school safe. Explore this essential Harry Potter set to discover incredible details like Dumbledore’s office with sliding spiral staircase, the Slytherin and Gryffindor common rooms, and so much more!