10217 Diagon Alley is a Harry Potter set LEGO released on January 1, 2011. The depicts the magical wizarding alley and shopping area located in London behind the Leaky Cauldron pub in the Harry Potter books and films. The set focuses on showing three primary buildings appearing in the Harry Potter universe: Ollivander's Wand Shop, Borgin and Burkes, and Gringotts Wizarding Bank. Each is rich in detail and contains many unique features and surprises.

As the set contains elements and features from more than one installment of the Harry Potter franchise, it is not considered to be part of any specific subtheme. Costing $199.99 and containing 2025 pieces, 10217 Diagon Alley was a major architectural undertaking and an attention to detail never before seen in the Harry Potter theme and is the largest Harry Potter set to date. It was designed by Niclas.

As well, the set contains a variety of unique minifigures; with twelve in total, it has the most minifigures of any Harry Potter set. These are Harry Potter, Hermione Granger, Ron Weasley, Fred Weasley, George Weasley, two Goblins, Mr. Ollivander, Lucius Malfoy, Fenrir Greyback, and a Skeleton. Along with the minifigures, the set includes animals such as owls, lampposts, and wizarding accessories such as newspapers, hats, and a cauldron.

The set is divided into three main buildings and various stands advertising wizarding merchandise. There are (in order of construction), Ollivanders Wand Shop, Borgin and Burkes (technically in Knockturn Alley), and Gringotts Bank. The Marauder's Map, and the newspapers , The Quibbler and The Daily Prophet are included. Also featured are several small market stands, selling pets, cauldrons and hats. Two lampposts are also included. 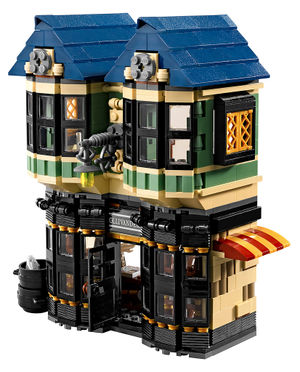 Ollivander's Wand Shop is a simple two-sided, two-story LEGO building in blue, sand, and green bricks, with ornate cast-iron effect black trimmings and is full of detail and decorations. Classic LEGO roof pieces are used to create the distinctive double-pointed roof of Ollivanders, and the outside of the shop has many glass windows. In addition, a LEGO sextant piece is used for a light fitting. The sign above the door reads "Ollivanders", and the side of the building has a wanted poster for an ambiguous dark wizard.

The inside of the shop has Ollivander's desk, which as a quill, a Quibbler magazine tile piece, and an exploding function. There are wand boxes on display behind the windows on the bottom floor. A moveable ladder allows minifigures to reach the top floor, which has potions and more wand cases (as well as two whip pieces previously seen in the Indiana Jones theme). There is also a bin with real LEGO wand pieces, as the wand cases are just stickers on tile pieces. 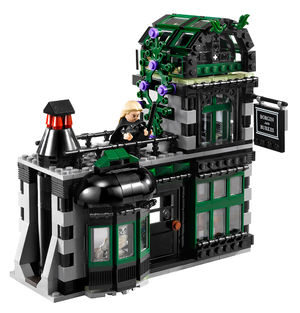 The shop has a black, gray, and green color scheme, and there is a chimney stack that, when rotated, turns around the fireplace in the interior of the shop (the one Harry reaches by Floo Network when he goes through the fireplace in 4840 The Burrow in Harry Potter and the Chamber of Secrets). The outside of the building is overgrown with green plants and has printed sign saying the name of the store hanging from a LEGO wand piece. There is a connection of flat windows that creates a rounded skylight-effect. A Vanishing Cabinet (whose twin appears in 4842 Hogwarts Castle), is included inside Borgin and Burkes well as a rat on the roof. 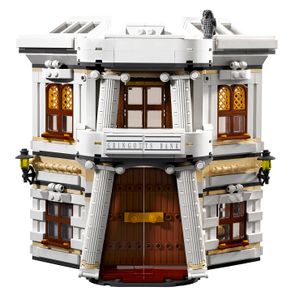 The bank in this set is the second of LEGO's depictions of Gringotts, with the first in 4714 Gringotts Bank this one being the actual bank instead of just the vault . As part of the 2011 Direct Sale Diagon Alley set, Gringotts has undergone a detailed overhaul, including dividing it into three sections that can be closed up together. Its new imposing facade is closely matched to the styling of the movies with colored bricks to reflect white marble, burnished bronze, gold leaf, and aged wood. The exterior of the building has four windows, each with a brown wand piece below them to make the window pieces look secure. Also are two lamps on the outside and two large brown front doors with golden studs representing doorknobs. The most interesting thing about the facade is the two-by-two round profiled brick for ornate columns, a new LEGO piece for builders. These are used to create the 'wonky' support pillars on the outside.

Stepping through the plastic wooden doors, minifigures find a large banking hall in the interior of Gringotts that features a clerk's desk and a large safe. The set does not have all the components contained in the 2002 set, such as the cart, but, unlike that set, it has a substantial building, so the two sets complement each other well. The vault is removable from the building and opens up to reveal the Philosophers's Stone and some coins. The goblin clerk's desk has a quill and a tan tile piece, and above it a key is held. Two torches are held in the building two portraits of wizards adorn the walls. An ornate, spinning chandelier hangs from the ceiling, the top of the building features a glass roof with skylights that are hinged to tile upwards.

The set includes twelve Minifigures: Harry Potter, Ron Weasley, Hermione Granger, Hagrid, Fred Weasley and George Weasley, two Gringotts Goblins, Mr. Ollivander, Lucius Malfoy (with Death Eater disguise), Fenrir Greyback, and a Skeleton. This is the first set to include Mr Ollivander and the Weasley twins in minifigure form, and both Gringotts Goblins are now featured with flesh colored skin and the same torso of Professor Flitwick, and both versions of the Goblin minifigure are unique to this set. Hermione has the same torso as the updated Ginny Weasley from 4840 The Burrow, but with plain legs. Ron appears with the same torso as he wears in 4841 Hogwarts Express, but here with brown pants. Harry also appears in the same outfit he wears in 4841 Hogwarts Express, but here he wears black pants. This casual version of Harry with black pants also appears in 4866 The Knight Bus. Also included in the set are four new, decorated owls.

Being previously represented in 4723 Diagon Alley Shops but without nearly the detail and craftsmanship, LEGO's second rendition of the wizarding shopping area is intended for much older builders. A late addition to the 2010 re-release of the theme, it was released in between the 2010 re-releases and the 2011 re-releases and received very positive reviews very quickly. The full Diagon Alley, as the largest Harry Potter set, exemplifies the quality and creativeness that is involved in LEGO merchandise. Each shop has a distinct style, color, and special functions that go along with the movies and books. The amount of accessories included in the set are also very good additions to other models in addition to livening up the set itself.

This is a description taken from LEGO.com. Please do not modify it. (visit this item's product page) Expand your very own wizarding world of Harry Potter™!

No need to pass through the Leaky Cauldron. Now even Muggles can shop in Diagon Alley by building this fantastically magical set that includes 3 extensively detailed buildings and 11 minifigures! Join Harry Potter, Ron Weasley and Hermione Granger as they shop for their Hogwarts school supplies. Visit Ollivanders, Borgin and Burkes, and Gringotts Bank. Each Diagon Alley building is realistically detailed. Ollivanders offers an extensive selection of wands, storage shelves and a step ladder that allows Ollivander to gather wands from the top floor. The front desk has an “exploding” function for those inconvenient times when a spell goes awry. Borgin and Burkes includes a scary skeleton, “glow-in-the-dark” elements, a fireplace attached to the Floo Network and a Vanishing Cabinet that Dark wizards might use to sneak into Hogwarts. Gringotts Bank is an impressive two-story building with large double doors, and can be opened completely into one large building or closed to create one smaller building. The bank’s interior features a removable vault, along with the Philosopher’s Stone, a clerk’s desk, a chandelier and ‘wonky’ support pillars. Includes 11 minifigures: Harry Potter, Ron Weasley and Hermione Granger, each with magic wand; Rubeus Hagrid, equipped with his pink umbrella; Fred and George Weasley; 2 Gringotts goblins; Mr. Ollivander; Lucius Malfoy (with Death Eater disguise); Fenrir Greyback; and 4 new, decorated owls.