4737 Quidditch Match is a Harry Potter set released on October 1, 2010. A remake of set 4726 Quidditch Practise, the set recreates the scene from Harry Potter and the Chamber of Secrets in which the Gryffindor team plays a game of Quidditch against the opposing Slytherin team. The minifigures included in the set are Harry Potter, Draco Malfoy, Oliver Wood, Marcus Flint, and Madam Hooch. 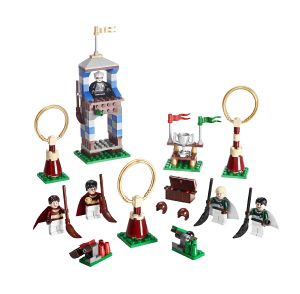 This set has noticeable improvements to previous versions of LEGO Quidditch. The goal posts are restyled, with each goal hoop featured as a straight, flexible piece and is then bent into position. A Ravenclaw spectator tower (mistakenly called a Hufflepuff tower by LEGO) is included for the referee, Madam Hooch, to sit in. The two catapults that come with the set are worked by a LEGO Technic pivot, and the Quidditch balls (a Quaffle and two Bludgers) are LEGO Technic ball joint pieces. The set comes with a metallic-effect trophy piece designed for 2010 as the school's Quidditch Cup, a new addition to the Quidditch sets. The stand holding the trophy also has a red flag for Gryffindor and a green flag for Slytherin. The set comes with five broomsticks, (three brown, one of them being on the spectators tower, and two black), and two clubs for Beaters. The set also comes with a gold stud piece to represent the Golden Snitch and two helmets for the players.

The minifigures included are Harry Potter, Draco Malfoy, Oliver Wood, Marcus Flint, and Madam Hooch. For the players, the Quidditch uniforms are improved from the previous set, different aspects being darker and having brown hands to represent protective leather clothes. Harry (a Seeker) and Oliver (the Captain) representing the Gryffindor team and Draco and Marcus representing the Slytherins (in the same positions, respectively). Madam Hooch's minifigure is improved as well; she has a double-sided head, more realistic hair, grey flying gloves, a gold detail on the school badge and a chain. Harry, Draco, and Hooch's heads are double sided.

This is a description taken from LEGO.com. Please do not modify it. (visit this item's product page) Catch the Golden Snitch™ and win the match for Gryffindor™!
Marcus Flint and the Slytherin team are winning! Gryffindor’s only chance to win is if Harry Potter is the first Seeker to catch the Golden Snitch! Beat the bludgers away, soar through goal posts, a tower or over the stands, fire catapults, catch the Snitch, then fly away through the Hufflepuff Tower with the trophy!