4738 Hagrid's Hut is a LEGO Harry Potter set released on October 1, 2010. The set contains aspects from multiple movies and is not considered to be part of any subtheme. It is the third incarnation of the Hagrid's Hut set, with 4707 Hagrid's Hut in 2001 and 4754 Hagrid's Hut in 2004. Like the previous versions of the set, the set recreates the residence of Hogwarts' gamekeeper, Rubeus Hagrid. This set contains a hut and the minifigures of Harry Potter, Ron Weasley, Hermione Granger, and Rubeus Hagrid. The animals of Aragog, a Rat, two owls, three spiders, and Norbert are also included. 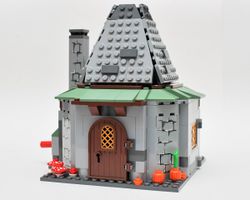 The exterior of the hut in this set.

The third release of the LEGO model of Hagrid's Hut continues the architectural shape and style established in the previous Hagrid's Hut (set 4754), but introduces a new stone effect, more accessories, and more minifigures. Compared to the previous release, this hut has more brown - or wood-colored - bricks inside, which creates a more rustic, homely interior design. Hagrid's home has giant-sized creature comforts, while tools and food hang from the rafters.

Hagrid’s Hut has an area of roughly twenty studs by eighteen studs. The hut has two doors, a window with lattice shutters, and a fireplace. Little natural light finds its way into Hagrid's Hut so, for the first time, the would-be dark interior is illuminated by the fire in the hearth. An external button activates a battery-operated light-up brick in the fireplace.

The shelf above the fireplace contains potion bottles, while a cauldron can be swiveled in and out of the the fireplace area. A fish and a turkey leg hang from the rafters, and a key for Hogwarts is held by a brick on the wall. There is also a small table with a yellow plate and transparent clear cup, and a furniture piece with an owl on top concealing a letter beneath. There is an axe hanging from the roof, a black broom propped up against the side of the roof, and another key being held on the wall. Another internal fixture is the baby dragon that Hagrid kept for himself, Norbert.

Like the previous Hagrid's Hut, set 4738 has four sides and a roof made of plastic bricks. However, instead of stones printed on the walls, this hut uses stickers with a pattern that highlights the edges of stones. There is also a stickered stone effect on the chimney and bricks to create the appearance of a leaky, patched up roof. The exterior of the hut pumpkins (orange minifigure heads) that are double-sided (one normal pumpkin side and one Jack-o-Lantern face) as well as mushrooms growing around the perimeter. Also included is one three leaf plant growing out of another pumpkin.

The minifigures in this set are Harry Potter, Ron Weasley, Hermione Granger, and Rubeus Hagrid. Each of the students, Harry, Ron, and Hermione have a reddish-brown wand and alternate faces. These are a stern Harry and Hermione and a shocked Ron. Each has the 2010 redesign Gryffindor torso, whih combines both the house badges and the colored stripe across the bottom. Hagrid's minifigure for 2010 has some small but distinctive modifications. The structure of the minifigure is the same, but he has a new printed pattern for his brown robes. He also has a silver detail on his belt buckle and new creases in the skin on his face. Being a half-giant, has a larger than normal minifigure with longer arms and minifig hands with actual visible fingers. This particular version of Ron is unique to this set.

This is a description taken from LEGO.com. Please do not modify it. (visit this item's product page) Action and adventure await you in Hagrid’s Hut!
On the shadowy outskirts of the Hogwarts™ School of Witchcraft and Wizardry grounds, Hagrid’s Hut is home to the school’s half-giant grounds keeper. Harry, Ron and Hermione never know what will await them there. From giant spiders to baby dragons, magic and mystery surround this rustic cabin.