This article is about the DC Super Heroes character. For other uses of the term, see Scarecrow (disambiguation).

“You know what I always say? FRIGHT makes right!”
―The Scarecrow in LEGO Batman 2

The Scarecrow, or Professor Jonathan Crane, is a minifigure from the Batman theme released in 2006. He was redesigned in 2013 for the Super Heroes theme. He is one of the many villains in Batman's rogues gallery.

Scarecrow wears a black wizard hat that droops backwards with a belt and buckle at the bottom of the point, above the brim. His head depicts a Glow-in-the-Dark face which shows a mask with red eyes and a mouth which has been sewn together posed in a sinister smirk with threads revealed. His torso is reddish brown with black hands and depicts raggedy clothing with a belt around his waist and cloth from his mask over his neck that becomes ripped. Scarecrow's legs are also reddish brown.

His 2013 redesign has his hat and legs recoloured dark brown, his hands dark grey, and his head tan. His face has small, red eyes with dark spots surrounding them for a sunken look and a mouth comparable to before, but now closed and smaller. His face is more detailed with printing added to portray the burlap mask he wears. He has back head printing depicting more of the stitched burlap mask mask he wears. His torso has rope above his waist and below his neck. Tan fabric hangs from the higher rope on his right side and rope dangles on his right. The back depicts the back of the fabric the ropes, and the stitches.

In LEGO Batman: The Videogame, Scarecrow is nearly identical to his appearances in 7786 The Batcopter: The Chase for Scarecrow and 7785 Arkham Asylum, but his hat flops when he moves and his head doesn't glow-in-the-dark. He is able to use fear toxins to petrify one basic enemy at a time and use mind control on certain enemies and doors.

His bi-plane is also a playable vehicle. It is able to shoot lasers, is immune to toxins, and is the only vehicle which can collect fear toxin torpedoes which can be used to stun turrets for a limited time.

He is also playable as Professor Jonathan Crane on the DS version.

He has a similar appearance in LEGO Batman 2: DC Super Heroes, except his head seems more tan in colour and he has back printing which is very similar to the printing on his front. On consoles he has virtually no abilities aside from the basic jumps and attacks. On portable versions he can attack with his fear gas and is immune to toxins.

Professor Jonathan Crane was bullied as a child for his bookish nature and scrawny figure. He became obsessed with fear and began to study it, eventually becoming a psychology professor in that field. He taught at Gotham University, but was fired for unethical experimenting. Professor Jonathan Crane then made a career out of villainy and became known as Scarecrow. Not only is he well-versed in fear, but Scarecrow uses it in his specialized toxins to bring out victims' nightmares.

In LEGO Batman: The Videogame, The Scarecrow is a a playable character and a boss in the DS game. On consoles, Scarecrow himself is not a boss, but he pilots his Bi-plane, which is. 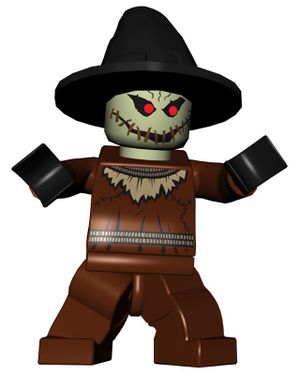 In the video game's story, Scarecrow was a part of The Joker's group, which also consisted of Killer Moth, Mad Hatter, and Harley Quinn.

After a series of events which involved the capture of Commissioner Gordon, Batman and Robin arrived to rescue him. The dynamic duo managed to defeat Harley Quinn and rescue Gordon, but Joker managed to escape in his helicopter. He summoned Scarecrow and his bi-plane to help in his escape and to create a diversion which would allow them destroy the Batwing with Batman in it. This plan failed and the dynamic duo gave chase to Scarecrow over the city. They eventually cornered him and were able to defeat him by towing him with the Bat-copter's winch. Scarecrow lost control of his plane after too many hits and crashed into Joker's helicopter. After nodding, Batman left both villains for dead and flew away in the Batwing. However, Joker and Scarecrow managed to escape using giant balloons which slowly lowered them to the ground.

However, the balloons eventually popped and the two fell through the skylight at the Gotham Art Gallery. They eluded the many Police Officers, Police Marksmen, S.W.A.T. Agents, and Security Guards. In the back of the gallery, they discovered an armoured van they planned to use for escape. However, they were ambushed by a group of police officers who grabbed Scarecrow with a crane and pinned Joker up against a wall. Joker managed to escape by contaminating the officers with his laughing gas, but left Scarecrow in his peril. Joker went to meet Killer Moth in a nearby alley and Scarecrow was returned to Arkham Asylum. 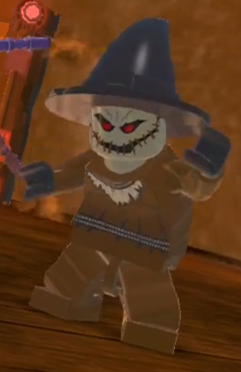 In LEGO Batman 2: DC Super Heroes, Scarecrow tries to escape after the Asylum Breakout. He is defeated by Batman and Robin during their investigation of The Joker's escape. He later can be found near Gotham Funland in a pumpkin shaped tent, and he can be purchased for 125,000 studs after being subdued. He no longer has mind control.

In the portable version, Scarecrow's minikit can be found in Arkham Asylum.

Scarecrow also appears in Asylum SINISTER! as one of the villains who tries to escape from Arkham.

This is a description taken from LEGO.com. Please do not modify it. The spooky Scarecrow was once Dr. Jonathan Crane, professor of psychology and specialist in phobias. Turning to a life of crime, he uses his fear gas and creepy costume to put a fright into the citizens of Gotham City.