Huntress, or Helena Bertinelli, is a minifigure who appeared in the DS version of LEGO Batman: The Videogame, but most of her parts are available on the character creator in consoles and PSP. She in LEGO Batman 2: DC Super Heroes on consoles for the first time, and then appears again in 2015 as a part of the Arrow Pack DLC for LEGO Batman 3: Beyond Gotham.

In LEGO Batman: The Videogame, Huntress had Marion Ravenwood's hairpiece in black. Her face has a purple butterfly mask and wears purple lipstick. Her torso is black, and has purple lines which run down her torso and curve in the upper half to give it shape. She wears a utility belt with grey packets, and has a yellow emblem at the center. Her legs and arms are black, but her hips and hands are purple.

Huntress is only playable on DS versions where she can walk tightropes and use the gymnastic poles to get to higher platforms. However, all of her parts, along with Azrael, The Spoiler, and Black Mask's, except for her hairpiece, are all available on consoles and PSP for usage in the character creator once the player reaches 100% completion.

Huntress reappears in LEGO Batman 2: DC Super Heroes along with fellow Batman-family members Batman, Robin, and Batgirl, but this time on consoles, without using the character creator. Her mask is still purple, but also a separate piece from her head, and is taller than her head, which having a print on a minifigure head restricted her older design from doing. The mask also has a strap under her chin like Batman and Hawkman's cowl/helmets. Her hairpiece has been changed from Marion Ravenwood's to Professor Dumbledore's in black, and she has red lipstick. Huntress' torso is black with a white cross design which takes up the entire torso. Her legs, arms, and cape are also black and her boots and gloves are purple. She carries a brown crossbow which shoots silver bolts.

Huntress wears a long, opened jacket with purple embroidery over the top half of her torso over a black catsuit. She has long black hair, a mask, and wields a crossbow.

Helena Bertinelli watches as her parents are murdered by the mafia in a coup, not realizing that her father is in actuality a mafia don. Scarred, Helena develops into the violent vigilante Huntress as an adult, swearing to bring down the mobs in Gotham City, making her both an enemy and an ally to Batman depending on the situation. Gotham's other vigilantes, however, such as Nightwing and Robin hold her in a higher regard. While working in Gotham City, The Question becomes intrigued by Huntress and attempts to help her find peace by taking her to his mentor, but he is disenchanted by her inability to stop killing and leaves her. After Question's death, Huntress eulogies him as her saviour.

After Gotham City is left in runes by an earthquake and Batman goes missing, Helena briefly becomes the second Batgirl, but Batman forces her to give up the mantle when he returns because he is sickened by her wearing his sign. He confides in Commissioner Gordon that Huntress reminds him of Barbara Gordon.

Aside from Question, other heroes have attempted to quell Huntress' anger. After Batman begins to make amends with Huntress, he invites her to join the Justice League as Green Arrow's replacement and Superman takes her under his wing. However, Huntress leaves the league on unfavourable terms when they have to prevent her from killing the super villain Prometheus. Since being discharged, Huntress has become a recurring member of the Birds of Prey, forming a friendship with Black Canary and a working relationship with Barbara Gordon. Barbara helps to create a civilian identity for Helena, where she is able to become an elementary school teacher, her childhood dream.

After The Flash causes the multiverse's history to reset, Helena is relocated to Earth-2 where she is the daughter of that world's Batman and Catwoman, becoming Robin. However, after her father, Superman, and Wonder Woman give their lives to stop an invasion by Darkseid, Robin and Supergirl find themselves transported from their native universe to Prime Earth. Helena Wayne adopts the identity of Helena Bertinelli, who is believed to be deceased, and becomes Huntress, while the Earth-2 Supergirl rebrands herself Power Girl. The two women try to adjust to their new universe before ultimately finding a way home.

After Nightwing has his identity publicly revealed and the world believes him to be dead, Batman arranges for Dick Grayson to infiltrate an espionage cabal known as Spyral. Dick discovers that Helena Bertinelli faked her death and has become an agent of Spyral. 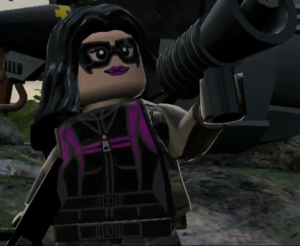 Helena Bertinelli plans to expose her gangster father Frank for his illicit activities when her laptop is discovered and wrongly assumed to belong to her fiance, Michael. Frank orders that Michael be executed for his treachery, and Helena is heartbroken. While Oliver Queen is investigating Frank for his connection to The Undertaking, he becomes romantically involved with Helena and begins training her as his partner so that she can redirect her anger. However, Helena's desire for vengeance leads her to the verge of killing her father and renouncing Oliver when he tries to stop her. Becoming known as Huntress, Helena continues to return to Starling City plotting to murder her father until he is killed by a stray bullet in a hostage crisis she has set up. Even in her father's death, Huntress still does not feel that her thirst for revenge has been quenched, and she only feels left behind with both Michael and her father dead.

Huntress played no role on DS versions of LEGO Batman: The Video Game, but could be unlocked for purchase after all the minikits on a certain level were discovered.

She did appear on consoles but only through character creator and was mentioned on the Batcomputer's data section. It confirms her alter-ego as Helena Bertinelli, that she is that last surviving member of a crime family, and that she has been both an ally and an enemy of the Batman-family.

Huntress reappears as a playable character in LEGO Batman 2: DC Super Heroes outside of DS versions of the game. On portable versions, she is an unlockable character. Her minikit can be found in the level Attack on LexCorp. She costs 100,000 studs.

Huntress is only playable in LEGO Batman 3: Beyond Gotham with the Arrow add-on DLC pack, based on her appearance in the CW show.