Deadshot is among the finest marksmen of the DC Comics and a world class assassin, often considered second only to Deathstroke. He first appears in LEGO Batman 2: DC Super Heroes, but is limited to portable versions. However, LEGO Batman 3: Beyond Gotham has made Deadshot playable on all consoles. An additional version of Deadshot based on The New 52 is available via The Squad DLC pack.

In LEGO Batman 2, Deadshot wears a boxy silver helmet with metal plating and a red-lensed eyepiece placed over his eye. He wears a red jumpsuit with his logo, a yellow targeting scope, on the right side of his chest. He wears yellow gloves and has a silver belt around his waist.

Deadshot is redesigned for LEGO Batman 3 with a more classic appearance. His headgear is no longer represented by a separate headpiece, but is instead designed on the head. It is not segmented, but appears tight with grey shadows over his monocole-less eye, cheeks, and mouth. He continues to wear a tight red costume, but it is split open at the chest to reveal layered metal. Likewise, segmented metal is visible when his shirt is cropped off at his abdomen. A similar, but more emphasized, target is on the center of his torso. Deadshot has a belt above his waist, and a pair of silver trunks on his legs. He wears yellow gloves and boots with matching bandoliers worn like bracelets around his elbows. His "wrist-mounted" guns are represented as handheld underhand devices with studs aligned with his palms as barrels. Deadshot is able to rapidly fire his guns at enemies and activate a special vision to search for hidden objects.

A version of Deadshot based on his appearance in The New 52 reboot is included in a DLC pack inspired by the Suicide Squad. Deadshot's helmet is again a separate piece, but is more detailed than his original appearance with tapering and more sophisticated contours. He also wears a pair of shoulder pads. Though not as plain as his original version, his costume is less busy than his regular-game version. A bomb collar is around his neck, yellow packets are over his heart, and a pattern of arrow-shaped metal armour begins under Deadshot's chest and continue down under his waist until it segues into a codpiece. His gloves and boots are again yellow, and while his wrist-mounts are constructed the same way, they are also yellow.

As a boy, Floyd Lawton is a troublesome, attention-seeking child who grows up in the shadow of his popular and well-behaved older brother, Eddie. Floyd too likes his brother, but resents adults and peers expecting him to be as prestigious as Eddie. The boys' father clearly favours his eldest son. Both boys are exceptionally skilled at the shooting range, even when they are young. Their manipulative mother, who mutually hates her husband, plans to use this to her advantage. She tells her sons teary lies about how their father has abused her, and pushes Eddie to agree to shoot him. Floyd refuses to commit such an atrocity, so his mother locks him in a shed until the deed is done. Floyd escapes and climbs a tree where he can see Eddie preparing to shoot their father. Not willing to let his brother stain his conscience with patricide, Floyd tries to shoot the gun out of his brother's hand, but the branch breaks just as he does and the bullet hits and kills Eddie while Eddie's bullet paralyzes their father.

After the incident, Floyd vows never to miss a shot again. He no longer cares whether he lives or dies, and only wishes that however he dies, it is spectacular and memorable. Deadshot first debuts as a vigilante in Gotham City and an ally to Batman, but he secretly plans to off the Dark Knight and use his status as Gotham's premier vigilante to take control of the underworld. Batman and Commissioner Gordon expose Deadshot, but he later returns as a mercenary whose loyalties are usually decided by a paycheck. However, after a few run-ins with Batman, he proves unwilling to kill the Caped Crusader because his sense of justice reminds him of his older brother. 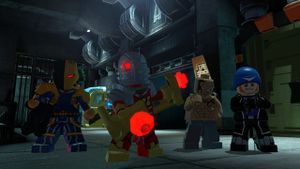 Deadshot's disregard for his own life and others makes him a prime candidate for Amanda Waller's Suicide Squad, a black ops team of expendable super villains commissioned by the government to undertake suicidal missions. Team leader Rick Flag becomes a surrogate brother, while Floyd considers Waller a fill-in for his mother. Due to the ethical controversy of the Suicide Squad, the team is kept a secret, but a senator threatens to expose them. Before Flag can kill the senator, Deadshot is ordered to stop Flag from committing the murder. To do so, Deadshot shoots the senator before Flag can, helping him to heal from the shot that killed Eddie and spared his father.

Sometime after Deadshot's time in the squad comes to an end, he learns that he has a daughter living in the slums of Star City. He takes vigilantism up again, declaring war on the gangs, while trying to reconnect with his daughter, but he realizes that he is a bad influence on her and leaves, but not before convincing Green Arrow to keep an eye on her neighbourhood.

When the Secret Society of Super Villains expands under Libra, a prophet of Darkseid, to include virtually every super villain on Earth except for The Joker, Deadshot initially joins and is ordered to kill a pride of lions Catman, an ex-villain who refused membership, is living with. Later, a man codenamed Mockingbird selects Deadshot for the Secret Six, a small alliance of villains opposed to the Society, and threatens to obliterate his daughter's neighbourhood if he does not accept. While with the Secret Six, Deadshot meets Catman, who is not aware that Floyd is the perpetrator, and they form a grudging friendship of sorts. Floyd also considers Catman a replacement for his brother. After the Society is defeated, Deadshot and Catman remain members as the Six becomes a team of mercenaries.

After The Flash and Reverse-Flash reset the timeline, Deadshot is first defeated by Batman after failing to kill a US senator, and is then locked up. He becomes the leader of the Suicide Squad in exchange for a shorter prison sentence.

Deadshot and the rest of "The Squad" are called into action when their home base of Belle Reve Penitentiary is infiltrated by an outsider who threatens to reveal their secrets.[1]