This article is about Hal Jordan as Green Lantern. For other uses of the term, see Green Lantern (disambiguation).

“I don't think this is your colour.”
―Green Lantern to Batman in LEGO Batman 2

Green Lantern has dark brown short hair (Part:62810). His double-sided face is Light Nougat with a dark green mask on both sides with a smirk on one side and an angry expression on the other. Besides the green mask with white eyes, both sides also have medium nougat lines on the cheeks and chin to give his face the appearance more shape. Green Lantern's torso is green and printed on both sides. The first side has a muscular print achieved with black lines. The sides are dark green where they wouldn't interfere with the core muscles until close to the bottom where they slant inward creating lighter green triangles above the hips. In the center of his chest is the Green Lantern logo. Dark green lines slanting inward toward the center and then mirroring on the other side go down the torso. The back of the torso has the same slanting lines and mirrored dark green on the sides. There are also black lines to show shape on his back. Green Lantern's arms are dark green and end with green hands. His legs are also dark green in colour and have no printing.

This variant uses the same hairpiece. The mask is angular and green with a dark green to show depth of the mask on his face, cheek bones, and a large smile. His torso is green, with black arms and white hands, and a muscular print is achieved with dark green lines with his Green Lantern logo in the centre of the breast area, and small black triangles on either side of the six pack abs. The hips are black the slightly go up on either side of the torso with the green coming down to form a triangle on the hips. The legs are green with black printing making up green boots. 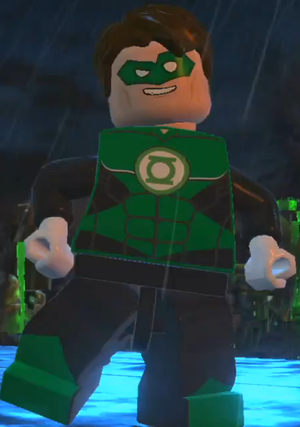 In LEGO Batman 2: DC Super Heroes, Green Lantern's appearance is comic-book based. He has a similar torso, but it is smoother without the triangles, has black in place of dark green, and the circle behind the Green Lantern logo is white. His arms are black and his hands white. His legs are also black, but have green boots printed on. Green Lantern's head and hair are the same, and he has been seen with a determined expression and smirk. He carries a ring piece similar to the one in The Lord of the Rings, but it is coloured green and has the green lantern logo on it.

He is seen using a construct that resembles one of the Boxer's gloves, is able to fly, and is the only character who can build sparkly, green LEGO objects.

In the comics, Hal Jordan is Green Lantern of sector 2814. He becomes that way when he is taken to the crash site of an alien space craft. The alien, identified as Abin Sur, says he is going to die from the effects of yellow sunlight on his ring, taking away life support and crashing the ship on earth, so Hal replaces Abin (though Guy Gardner was also found suitable, Hal was closer, so he got the ring) and puts his ship on the moon so it does not suffer any further damage until the villain legion destroys it while looking for the ring. Hal is now a member of the Justice League, which also consists of Batman, Flash, Superman, Wonder Woman, and on some occasions Nightwing, Batgirl, and Huntress. Hal also figured out the the impurity in the green energy was actually the villain parrallax who was trapped in the central power battery. Parrallax is a villain who uses fear to destroy entire races in their own paranoia. Hal realized that if he could overcome fear, and parrallax, yellow could become useless against him and he could become the most powerful Green Lantern ever.

Green Lantern appears in LEGO Batman 2: DC Super Heroes and is able to fly and build objects from special green bricks. Green Lantern appears during the defense of WayneTech when the Joker is attacking in his Kryptonite Mech. He enters through the bottom with Batman, Robin, and Cyborg.

Hal Jordan is the only Green Lantern to appear in the game.

Green Lantern appears in The LEGO Movie and is voiced by actor Jonah Hill. In the movie, he is a Master Builder who, in his attempts to be a friend to Superman (also a Master Builder), frequently and unknowingly annoys him. Like the other Master Builders, he his captured by Lord Business in a surprise attack on Cloud Cuckoo Land, and put in his Think Tank (sharing a cell next to Superman) to use to generate instructions. He is later saved by Emmet and the other protagonists, and fights alongside the Master Builders against Lord Business's Kragle and Micro Managers.

Green Lantern is the only lantern in the corps to not get brainwashed by Brainiac in the beginning of the game. Green Lantern and Martian Manhunter are alerted by Batman to the presence of Brainiac's ship. Green Lantern leaves to investigate Brainiac's ship. Members of the Justice League go to stake out brainiac's ship but are ambushed by Green Lantern who has been hypnotized by Brainiac. Robin tries to talk him out of his trance but the others cut him off and seal Lantern out of the ship. Lantern, still hypnotized, then returns to Brainiac's spaceship and takes his place in Brainiac's shrink ray, Brainiac having captured all the Green Lanterns to activate it. while Superman fends off the shrink ray and keeps it at bay, The others snag and manage to get inside Brainiac's UFO. When the group confronts Brainiac, the villain turns up the power of the ray making it to much for Superman, causing the Man of Steel to fall out of the sky towards Earth, having been weakened by the ray. This causes the ray to overload, exploding it and waking the Lanterns from their hypnosis and sending all back to their respective planets. Meanwhile, the UFO crashes into the Watchtower. Green Lantern, who went back to Oa, manage to stop it. Now un-hypnotized, he and the rest of the League set out to thwart Brainiac.