“This city needs a strong, decisive leader... or maybe not.”
―Two-Face's soundbite in LEGO Batman 2

Two-Face, or Harvey Dent, is a minifigure originally from the Batman theme released in 2006. Two-Face reappeared in the DC Universe Super Heroes theme in 2012.

Two-Face is known for being the first minifigure with a printed hair piece, it is base-white that's wild and spikey on the left side, and neatly-combed black hair on the right. The right side of his face is also quite normal, but the left side is sand purple, scarred, and deformed. His torso is white on the right and black on the left on both the front and the back. Two-Face's hips and legs continue the split motif, being white on the right and black on the left. His hands are also different colours. This variant came armed with a machine gun and held a stud, representing a coin. This version is likely supposed to replicate the character's appearance from Batman: The Animated Series

In 2012, Two-Face was rereleased in 6864 Batmobile and the Two-Face Chase from the Super Heroes theme. Two-Face has the same split white/black hairpiece. His head is still Light Nougat, but the scarred side of his face is now a different shade of purple (as sand purple has been retired) and has the mouth in a frown rather than the smile his predecessor had. Two-Face's scarred eye now has no pupil. The unharmed side of his face now has a slight smile, a cheek bone, and a redesigned eyebrow. Two-Face still sports a suit with a split-motif, but its colourscheme has been changed drastically from his original. Rather than being white on his right side and black on the left, it is now orange on his right side and purple (the Medium Lilac variety, which is darker and less dull than the sand variety) on the left. This motif and colour scheme continues onto his back, down onto hips, onto his legs, and to his arms. Both of Two-Face's hands Light Nougat, rather than one being scarred. In preliminary images, he is shown without weapons, but he has a new coin piece. Two-Face's torso and hips now employ newer printing methods where Black lines are more common to give shape to his suit.

Two-Face's suit is based on his first appearance in the DC Universe, but his hair and face are redesigned versions of the 2006 Two-Face variation, which was based on Batman: The Animated Series (save for the sand purple skin which came from different source material). This variant of Two-Face has a new silver coin piece.

A microfigure of him appeared in 50003 Batman. He is orange and printed with his Super Heroes variant.

In LEGO Batman: The Videogame the back of Two-Face's torso is white without any black and his hips are white and black on not only the front, but also the back. Other than that, Two-Face is identical to his set appearence. He is armed with two pistols with unlimited ammunition and is immune to toxic waste. When left standing without his guns drawn, he continually flips his coin.

Two-Face reappears in LEGO Batman 2: DC Super Heroes with his appearance from 6864 Batmobile and the Two-Face Chase but on some consoles both of his arms are purple. He is once again armed with dual pistols and his coin has been updated to match its set appearance. He was also given a two sided personalty.

Harvey Dent was the District Attorney of Gotham City until a villain named "Sal 'Boss' Maroni" threw acid in his face during a trial. Horribly disfigured on the left side, Dent snapped, developing a split personality and an obsession with duality and the number two. He became the criminal Two-Face, one of the key crime bosses in the city, planning crimes and making critical decisions by flipping his signature mutilated coin. While he is primarily a planner of elaborate crimes who uses his thorough understanding of the law to abuse loopholes, he is capable of holding his own in a fist-fight and is considered an expert marksman. 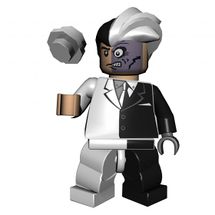 Two-Face in LEGO Batman: The Videogame

In the video game's story, Two-Face was an important part of The Riddler's group, which also consisted of Clayface, Mr. Freeze, and Poison Ivy. Two-Face would lend transportation to the other members of the group so that they may retrieve the objects necessary to rob the Gotham City Gold Reserves. He was also the only member of the group (besides The Riddler) who was not captured by Batman and Robin prior to the infiltrations of Wayne Tech and the gold reserves.

Two-Face played a small role in the prologue. He was seen driving his van away from Arkham Asylum with Poison Ivy, Clayface, and The Riddler somewhere on or in it. Mr. Freeze ran behind to make the scene more comedic. The Riddler then held a briefing session with Two-Face his partners; Mr. Freeze, Poison Ivy, and Clayface. They were planning a siege on the Gotham Gold Reserves, but needed several objects to do so; A Giant Key, Mutant Vine Seeds, a Freeze Ray, and Wayne Tech's Super Laser.

Two-Face provided transportation for The Riddler and Clayface who were attempting to retrieve a key from a bank which they needed to rob the Gotham City Gold Reserves. Clayface was defeated and captured by Batman and Robin and sent back to Arkham Asylum, but Two-Face managed to rescue The Riddler in his van. Unbeknownst to either of them though, Batman planted a tracking device on the back of the van.

Two-Face once again provided transportation for The Riddler and this time, Mr. Freeze too. They were hoping to secure Mr. Freeze's old ice cream factory. When the Freeze Cannon was secured, Mr. Freeze insisted on staying in the factory to unleash the Freeze Girls as his minions. Like Clayface, Mr. Freeze was defeated and captured by Batman, but Riddler and Two-Face managed to get away in their van again.

Batman gave chase to the van in the Batmobile, but Two-Face and Riddler were already farther ahead and in favour of escaping. However, Commissioner Gordon intervened and managed to box them in outside of Police Headquarters until the Batmobile could catch up. Riddler called for his goons to protect them, but their vans were destroyed by the Batmobile, which by this time had reached Police Headquarters. A fight ensued which resulted in Two-Face's van being destroyed. Riddler and Two-Face split up to evade Batman and Robin. Two-Face managed to escape and rebuild his van when the dynamic duo went after The Riddler.

Riddler had been able to escape Batman with the help of Poison Ivy, who also assisted him in stealing mutant vine seeds from the botanical gardens. Ivy stayed at the gardens to tend after the plants where she was defeated and captured by Batman, while The Riddler met up with Two-Face and his reconstructed truck.

Two-Face and Riddler were now the only two left in the group. They managed to infiltrate Wayne Tech and stole their Super Laser.

With all four items planned for the siege of the Gold Reserves in possession, Two-Face and Riddler made their move on it. They used the Freeze Ray to create a bridge of ice over a surrounding body of water, the vine seeds to scale a cliff, and the Super Laser to attempt to destroy the door. However, the laser beam rebounded and destroyed the Super Laser. With their primary weapon destroyed, Riddler and Two-Face were attacked by S.W.A.T. Agents, but managed to scale the reserves and build a device to enhance the Mind-Control technology in The Riddler's "?" cane. He took control of the Pilot in a nearby Police Helicopter to shoot down the reserve's doors. Using their different abilities, Riddler and Two-Face solved the puzzles in the interior and defeated many more S.W.A.T. Agents and Police Officers. Reaching the vault, the two made use of the defence robot to destroy the vault door, meaning they wouldn't need the key Clayface had obtained earlier.

By this time, Batman and Robin caught up with the two. Riddler ordered Two-Face to create a diversion. Two-Face shot a hole in a nearby barrel holding toxic waste, covering most of the floor in the deadly substance. Robin used pieces collected with his Attract Suit to create a swamp boat and reach Two-Face. In the resulting fight, Two-Face was nearly defeated, but escaped in the direction which Riddler had gone. Batman and Robin followed Two-Face through the vault. Riddler ordered Two-Face to attack. This time, Two-Face was almost defeated, but ran to the side of The Riddler at the last moment. The Riddler then used the vault's defence laser to try and defeat the Dynamic Duo. Batman and Robin used the chromed gold to deflect the laser beams back at The Riddler until his laser was destroyed. The Riddler then changed his tactics to using the mind control technology in his "?" cane to take control of a whimpering Two-Face, and attack the Duo himself. Eventually, both Riddler and Two-Face were knocked back into a pile of gold bars, subduing them both.

“Batman, am I pleased to see you?(flips the coin) No, not at all.”
―Two-Face's soundbite in LEGO Batman 2

At some point in LEGO Batman 2: DC Super Heroes, Two-Face is one of the villains who raids The Man of the Year award ceremony, the others being The Joker, The Riddler, The Penguin, and Harley Quinn. He is seen listening to Joker's acceptance speech from Lex Luthor's table after Joker steals the trophy. When Batman and Robin arrive in the Bat-boat, he flees through the stage trapdoor with Joker, Riddler, and Penguin, leaving Harley to cover their flight. He was found and defeated by Batman and Robin.

He is one of the villains freed by Joker and Lex Luthor with the Deconstructor. His good side was troubled that someone would have to clean up the mess, but his evil side was happy to be freed.

Two-Face tried to escape the Asylum on his truck with Harley Quinn and Riddler when Batman and Robin arrived to stop the breakout. He escaped shortly after with even more inmates. Two-Face later can be found at town hall, and can be bought for 125,000 studs when he is subdued.

His truck is later seen when The Joker is chasing Batman in a robot through Gotham City and a minikit is revealed if it is destroyed.

This is a description taken from LEGO.com. Please do not modify it. One of Gotham City’s craftiest criminals, Two-Face is double-trouble for LEGO Batman! Always plotting more mischief and mayhem in Gotham City, this villain uses a two-headed coin to make decisions and cause chaos for the peaceful citizens. He’s after a big score at the Gotham City Bank when he plans a heist with his pair of henchman.