Cookies help us deliver our services. By using our services, you agree to our use of cookies. More information
Navigation
Actions
Reviews
Fan space
ShoutWiki messages
Wiki tools
From Brickipedia, the LEGO Wiki
(Redirected from The Scarecrow (The Wizard of Oz))

This article is about the The Wizard of Oz character. For the Super Heroes character, see The Scarecrow.

The Scarecrow is a The LEGO Movie 2 collectable minifigure released in 2019, based on the character in The Wizard of Oz. He first appeared as a video game character in Dimensions in 2015. 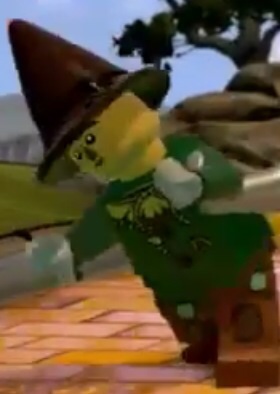 The Scarecrow in LEGO Dimensions.

The Scarecrow was sown by a farmer in an effort he would scare away crows. The fact The Scarecrow didn't have a brain meant he did not know how to scare away the birds, so his farmer left him tied to a pole in a corn field. One day Dorothy Gale and her pet dog, Toto, were on the crossroads that the Scarecrow's cornfield is beside. The two did not know which path to take and The Scarecrow voiced his opinion. Dorothy let the Scarecrow down off his pole, and he told her he couldn't get down by himself, as he didn't have a brain. Dorothy told The Scarecrow that she is going to the Emerald City to ask the powerful Wizard to return her home and The Scarecrow could join her and ask for a brain. The Scarecrow accepted and the two ran down the yellow brick road together, with Toto. The three became hungry and decided to pick apples off some trees. The trees turned out to be alive and start pelting them with apples, the three sought refuge beside a Tin Man. The Tin Man turned out to be alive too, bu het is rusted and needed oil to move. Dorothy loosened his joints with the nearby oil can. The Tin Man told The Scarecrow and Dorothy about how he doesn't have a heart. Dorothy invited him too on the journey to the Emerald City, to ask for a heart. The three then get attacked by the Wicked Witch of the West, she threw fire at The Scarecrow but he dodged it. The Wicked Witch of the West retreated and left for her castle. The friends trembled as the road goes through a forest and they fear they'll be ambushed by a lion, tiger or bear. A lion attacked the four, but Dorothy smacked him. She called him The Lion a coward, which made him admit it and cry.

The five heading for the Emerald City