Red Hood is a The LEGO Batman Movie minifigure introduced in 2017 as one of 20 collectable minifigures released in the movie's coinciding Minifigures series.

The LEGO Batman Movie's interpretation of the Red Hood character draws on two different versions of the character from the comics, similar to the designs of other characters in the movie. He wears a tuxedo, cape, and domed red helmet (accomplished with a newly introduced armour piece also used by Mr. Freeze) which are worn by classic variations of the character, often inconclusively associated with a possible origin story for The Joker. Meanwhile, the minifigure also carries two handguns and has a smaller helmet with white eyes and black lines underneath the dome, motifs which are evocative of the Jason Todd incarnation of the character.

The Red Hood is a minor unidentified criminal who was confronted by Batman one night at Ace Chemicals. The Red Hood was never apprehended, but fell into an exposed vat of toxins. His fate is ultimately unknown, but he is popularly supposed to be The Joker, with the toxins the cause of his disfigurement. Even The Joker himself is not sure if this is true, however.

Some years later, Jason Todd adopts the mantra for himself subsequent to his resurrection in the Lazarus Pits.

In The LEGO Batman Movie[edit] 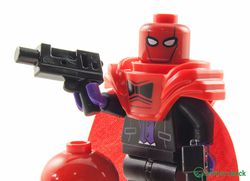 Red Hood is among the entourage of super villains who attack Gotham Energy and Commissioner Gordon's retirement party.

This is a description taken from LEGO.com. Please do not modify it. (visit this item's product page) With his face hidden beneath a featureless dome-shaped helmet, the Red Hood™ is one mysterious super-villain. His cape, suit and bow tie make him cut quite the dashing figure, but unfortunately he uses all of his fashionable panache for evil. Rumors suggest that the Red Hood may have a secret connection to Batman™ or one of his arch-villains, but nobody seems to know for sure!