Cookies help us deliver our services. By using our services, you agree to our use of cookies. More information
Navigation
Actions
Reviews
Fan space
ShoutWiki messages
Wiki tools
From Brickipedia, the LEGO Wiki
(Redirected from Gun) 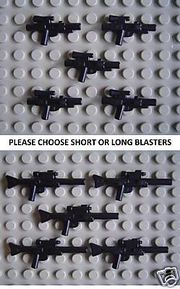 A gun is a weapon used by minifigures. It is also one of the most featured accessories in the LEGO Star Wars line. Others have appeared in themes such as Western, Adventurers, Agents, and Indiana Jones.

A gun may refer to several LEGO pieces:

It may also refer to an early LEGO toy, Halvautomatisk Legetöjspistol.