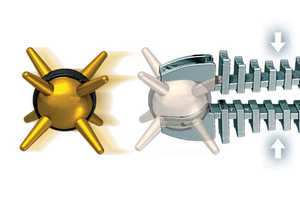 For the part page of two of the parts that make up the Thornax Launcher, see Part:64275.

The Thornax Launcher is a BIONICLE weapon seen in the 2009 sets. It's slightly different for some of the other BIONICLE projectile weapons because it isn't one whole piece. At the very least, a whole Thornax launcher consists of four parts and the ammo. This makes it a very modifiable weapon that adds to playability. It is usually held at a certain angle in the fists of Glatorian or Glatorian Legends in its simple four-piece form, but 8978 Skrall, 8981 Tarix, and 8986 Vastus have them attached to their weapons. 8979 Malum has his Thornax Launcher mounted to his shoulder, and 8980 Gresh holds his launcher in an unorthodox "pistol" type fashion. Every vehicle set of summer 2009 used Thornax Launchers in unique ways, and sometimes would consist of more than one launcher.

Thornax Launchers fired large, gold coloured spiked balls called Thornax. Except for the black ring around the center, Thornax consisted of rubbery material. For every Thornax Launcher that came in a set, one Thornax was provided.

To fire the Thornax, the user would slide the ball into the launcher by using the hard black ring. With two fingers, the user would then press down on both sides of the Thornax Launcher in the curved indentations, which in turn would thrust the Thornax out. The rubbery spikes Thornax had allowed the ball to bounce a little when it fell to the ground, a key element in the Glatorian Action Figure Game.

A weapon of the same type called Meteor Blaster is used by Hero Factory Villains, except it shoots different projectiles.