This article is about Harley Quinn in costume. For out of costume, see Dr. Harleen Quinzel.

Harley Quinn, or Dr. Harleen Quinzel, is a minifigure originally from the Batman theme who works alongside The Joker and on occasion, her friend Poison Ivy. Harley was re-introduced for the Super Heroes theme in 2012.

Harley Quinn was the first minifigure to use the jester hat, and she is currently still the only one to have it with red on the right side, black on the left side, and with both balls at the end of the hat tails white. Harley's face is a standard white minifigure head with a black, pointed harlequin mask covering her blue eyes. Harley's mouth has black lips with a very small hint of dark red, and yellowed teeth are exposed through a menacing grin. Harley's torso is double-sided. On the front, right under her neck is a clown bib with three break-offs, each ending in white balls. Harley has a checker board pattern on her torso to add to the jester effect; her upper right-hand corner is black, her upper left-hand corner is red, her lower left-hand corner is also red, and her lower right hand corner is black. Harley's torso is also decorated with white lines to give her a feminine shape. This design continues on Harley's back, but the checker board pattern is reversed. Harley's right arm is black, her left one is red, and both end in white hands. Her hips are red with black printing on the front of her left side. Her left leg is also black, but with two red ♦'s at the center of her leg. Harley's right leg is red and has three black ♦'s coming from the top. This variant, as with most of the minifigures from the Batman line is based upon and strongly resembles its counterpart from the '90s TV show, Batman: The Animated Series.

For her return appearance in Super Heroes (in 6857 The Dynamic Duo Funhouse Escape), Harley has been redesigned. She sports the same red/black jester hat with white balls at the ends, but the rest of her minifigure has been redesigned. Harley's head is still coloured white, but now has a double sided face. Both sides have the same black mask with redesigned eyes (which are now Black and more realistic, rather than light blue circles). But, her expression changes between the two sides; one side has her lips in a mischievous grin (similar to Catwoman and Poison Ivy's). The other side has an open mouth showing of her teeth (which are now white, rather than yellow) in an angry expression. Harley's clothing now has a more angular appearance with her clown bib having triangular ends, rather than rounded, that still end in small white balls. Harley has the same red/black checkerboard pattern, but her feminine lines are now are darker red rather than white. Harley's arms and legs follow the same pattern as they did before, but the pattern now extends to her hands with her right one being red and her left being black. Harley's legs have changed very little, but the black line on her hip now extends slightly farther down than before. Harley still has the same pattern on her legs with three ♦'s on her right leg and two on her left. The ♦'s are now smaller and slightly farther apart. The ♦ pattern on her left leg now start at the top rather than the bottom. 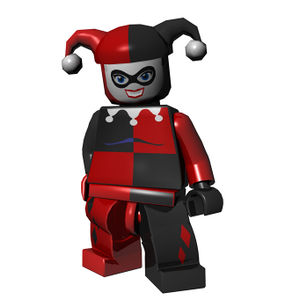 In LEGO Batman: The Videogame, Harley Quinn is identical to her appearance in 7886 The Batcycle: Harley Quinn's Hammer Truck, but her mallet is slightly larger.

As the Harley Quinn minifigure and video game were to be released in the same year, a less detailed version appeared in preliminary game shots of LEGO Batman. Notably, a black and white picture of Harley's preliminary game version appears on Joker's bulletin board after one of his villain levels are completed.

Harley is able to double-jump and open doors which require female villains. She is armed with her mallet and a handgun.

Harley reappears in LEGO Batman 2: DC Super Heroes with her appearance from 6857 The Dynamic Duo Funhouse Escape. She has acrobatics which allow her to swing on poles, double jump, and climb blue and white checkered walls. She carries a hammer which can be thrown and act as a boomerang. It can be stuck in Robin's acrobat sockets and used as a pole to swing on when it is.

Dr. Harleen Quinzel was a psychiatrist interning at Arkham Asylum, having been fascinated in studying the Joker. During their sessions, Quinzel fell madly in love with the Joker, breaking him out of Arkham several times and having her psychiatric license revoked. She would then re-invent herself as Harley Quinn, sidekick and lover of the Joker. Besides the Joker, Harley Quinn also works with Poison Ivy, with whom she is close friends. She is a skilled gymnast as well as having psychiatric knowledge. She refers to the Joker as "Mister J" or her pet name "Puddin'" rather than by his title.

In LEGO Batman: The Videogame's story, Harley Quinn was an important part of The Joker's group, which also consisted of Killer Moth, Mad Hatter, and The Scarecrow.

Harley and The Joker lured Commissioner Gordon to an old fairground where they captured him. When Batman arrived to rescue Gordon, The Joker ordered Harley to attack Batman while The Joker made his escape. After she was defeated, Harley was placed in a Police Van, where she was held until later when she was rescued by The Joker and Killer Moth. Killer Moth was attracted to the flood-lights on the arriving Batwing, a sight of which caused Harley and The Joker to run to the Gotham Cathedral, where they set up their laughing gas. When The Dynamic Duo and Police Officers arrived, Robin opened a window to gain entry. Harley jumped out, knocking off several Henchmen. Harley was defeated with large water guns on the back of police vans. Batman and Robin chased Harley to the top of the Cathedral where she and The Joker hid in giant bells. Once they were discovered by Batman, The Joker summoned his helicopter for protection, but once the helicopter was destroyed, it destroyed the platform which Harley and The Joker were on, knocking Harley unconscious. The Joker then attacked the Dynamic Duo, successfully defeating them with his Joy-Buzzer, knocking them unconscious. Harley was revived by the time Batman was. Batman threw a batarang at the giant bells which disturbed the bats in the tower who attacked Harley and The Joker who were then arrested by Commissioner Gordon and sent back to Arkham Asylum.

Harley Quinn returns for LEGO Batman 2: DC Super Heroes. She is still The Joker's sidekick and helps him steal the Man of the Year award from Bruce Wayne, and sits at Lex Luthor's table while with The Penguin, The Riddler, and Two-Face while Joker gives his "acceptance speech". When Batman and Robin arrive, Harley covers for the other four villains while they flee through the stage's trapdoor.

She is later freed from Arkham Asylum by The Joker along with The Penguin, Catwoman, Two-Face, Poison Ivy, The Riddler, and Bane. She attempts to escape the Asylum with Two-Face and Riddler on Two-Face's truck, but they are defeated. However, she and Poison Ivy can be seen hijacking a police van during Batman and Commissioner Gordon's conversation with an unidentified character driving it away.

After the massive Arkham Asylum breakout, Harley can be found near Gotham Funland and can be purchased for 125,000 studs after she is defeated.

Her hammer truck is a playable vehicle, and a "Harley Quinn bike" is available with downloadable content from ShopTo or by reaching 100% completion.

This is a description taken from LEGO.com. Please do not modify it. Psychologist Dr. Harleen Quinzel became the wild and wacky LEGO Harley Quinn after meeting The Joker at Arkham Asylum. Instead of curing her crazy patient, she became his prankster partner in crime! Together, they terrorize the citizens of Gotham City with toxic laughing gas and other dangerous gags in their crazy crime spree and menacing mission stop LEGO Batman once and for all!