Poison Ivy, or Pamela Isley, was one of Batman's enemies and a dangerous eco-terrorist. She was originally released in 7785 Arkham Asylum in 2006's Batman theme. In 2012, she was re-released as a part of in the Super Heroes theme and has appeared in several sets since.

Like most of the villains from the original Batman theme, Poison Ivy is based on her appearance in Batman: The Animated Series.

In 2006's 7785 Arkham Asylum, Ivy had long hair, the same type of hairpiece used for Professor Dumbledore, but in Dark Red. Her headpiece was new and exclusive to the minifigure. It had pointed red eyebrows, green lips, and black eyes with light green eye shadow. She had a flesh coloured torso with printing of a cover-up made entirely out of leaves. Ivy's legs were Sand Green with Green hips.

In 2012, Ivy has Elsa Schneider's hair, but in red with leaves printed on it. Her new double sidedhead features a sly and cunning grin and an angry face. She has a touch of pale green eyeshadow. Her torso depicts a sash and a bodysuit made entirely out of leaves. Her torso also has zigzag lines on it. Her back features a continuation of the same pattern. Her legs also have a continuation of the bodysuit. Ivy's entire costume is Bright and Lime Green. Ivy accessory is a vine whip which in 6860 The Batcave is dark green and in 10937 Batman: Arkham Asylum Breakout is lime.

Like most of the minifigures in the Super Heroes DC Universe theme, she is based on her appearance in some of the comics. 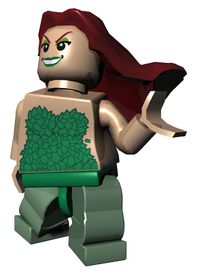 Poison Ivy's appearance in LEGO Batman: The Videogame is identical to her appearance in 7785 Arkham Asylum. In the video game Ivy can super jump, open doors that require female villains, make plants with pink hearts grow, and safely walk into toxic waste. She can also kill an enemy with a toxic kiss, either in close range or blown as green smoke.

She was also playable as Pamela Isley and in an alternate costume.

In LEGO Batman 2: DC Super Heroes, Poison Ivy appearance is identical to her appearance in 6860 The Batcave. She is able to use her vine as a whip, double jump, and activate several plant patches. She can also pick characters up and throw them to the ground as a special attack. Like many other female villains, she can perform a super high jump.

Pamela Lillian Isley was a young botanist. When her professor tricked her into stealing ancient herbs, he poisoned her with them so she could not give him away. She survived and while getting an immunity to toxins, Isley went insane and became Poison Ivy, an eco-terrorist out to save the environment in a deranged way. Because she acquired plant powers, Ivy revolves her crimes around her obsession with plants and a twisted way of saving the environment. In addition to her knowledge of plants and toxic immunity, Ivy is known to also be able to manipulate plants with her mind. Harley Quinn is a chief ally of hers in several of her schemes, her best friend, and usually the only human Ivy doesn't hate, though she has an on-and-off friendship with Catwoman and has shown attraction to Batman. She hates The Joker because of his attitude towards her and Harley; Poison Ivy has teamed up with Batman a few times to stop his plans.

Though she is a villain, Ivy has fought with Batman and Batgirl against other rogues, probably most notably as a member of the Birds of Prey.

In LEGO Batman: The Videogame, Poison Ivy is a boss in A Poisonous Appointment and unlocked after the level Green Fingers in the The Riddler's Revenge story was completed.

Poison Ivy is a member of a group led by The Riddler which also includes Clayface, Mr. Freeze, and Two-Face. After Two-Face's armoured car was destroyed by the Batmobile, she rescued The Riddler from Batman and Robin. She then helped The Riddler to steal mutant vine seeds he needed for his plan to rob the Gotham City Gold Reserves. After they secured the seeds, she decided to stay as she was happy among all the plants. She was then defeated by Batman and Robin and sent to back Arkham Asylum.

Poison Ivy was also the creator and mistress of the Poison Ivy Goons. 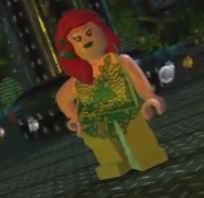 Poison Ivy is one of the villains freed from Arkham Asylum by the Deconstructor, along with The Penguin, Catwoman, Two-Face, Harley Quinn, Bane, and The Riddler. She attempts to escape on Bane's mole-machine with Bane and Penguin when Batman and Robin arrive. They are stopped for a time, but escape again along with even more inmates shortly after.

In the hub, Ivy once again appears at the Botanic Gardens. She can be bought for 125,000 studs after she is defeated.

This is a description taken from LEGO.com. Please do not modify it. In a freak accident at the nature lab, Poison Ivy was transformed from a quiet botanist to a crazed, plant-loving villain. She terrorizes the town with toxic concoctions and her poisonous kiss in her quest to make Gotham City a haven for her evil weeds.