6860 The Batcave is a DC Universe Super Heroes set officially released on January 1, 2012. It consists of a large model of the Batcave, and it is the second set to be based off of this location, the first being 7783 The Batcave: The Penguin and Mr. Freeze's Invasion.

The Batcave playset is comprised of three sections, two vehicles - the Batcycle and Bane's mole machine - , as well as five redesigned minifigures, two of which are exclusive to the set; Batman in his blue Super Heroes suit with a cape, Robin, Bruce Wayne, Bane, and Poison Ivy. Batman and Robin's variations also appear in 6857 The Dynamic Duo Funhouse Escape.

The smallest part which makes up the Batcave is Poison Ivy's cell. It is a small rectangular area with four columns built up out of rocks until there is enough room for there to be at least a single LEGO brick above Ivy's head and a ceiling takes shape. The front of the cell is barred by four transparent fluorescent blue bars (lightsaber blades) held by black fence pieces. The bars may be removed due to being loosely connected via yellow 1x2 plates with a single stud in the center. The other three sides of the holding cell using transparent fluorescent blue wall pieces. One on the left side has a scan on Ivy (using a sticker), while the other two have plant designs (also using stickers). On the roof of the cell is a sign which reads "HOLDING CELL" in yellow letters. There is also a turret with a red light at the top which has the ability to fire blue flick-fire missiles. A sign on the turret reads "ALERT!" in red letters. 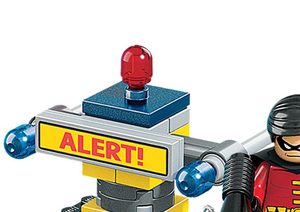 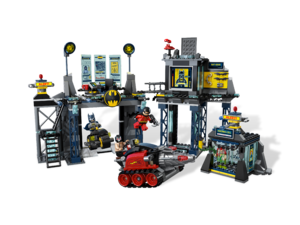 The next part of the Batcave is the elevator and the BAT-GEAR weapon arsenal. Most of this area is risen up fairly high using triangular, dark blue support girders. On the floor on top of the girders is a computerized image of a bat-suit (achieved with a sticker). To the left is a yellow wall with various equipment including Batarangs, binoculars, and handcuffs. The floor on top of the bat-suit image is a small area with a red bat-phone which Commissioner Gordon uses to contact Batman directly. There is a play feature in this area. Bruce Wayne will stand at the top of the tower and be lowered when an axle is pulled out on the back of the tower as part of the floor is the top of an elevator. Batman will be below, behind the bat-suit image on the inside of the elevator, and will be lowered to the ground floor, leaving Bruce Wayne behind the bat-suit image, giving the appearance that he has changed into Batman.

The final area of the Batcave is not as tall as the former, but is the widest. It has two stories; the batcomputer on the top and an entrance on the bottom. The bottom floor has two dark blue support girders in the front and grey rock pieces in the back. There are two black door halves which can split apart to allow the Batcycle (or the Batmobile from 6864 Batmobile and the Two-Face Chase as shown in commercials) to enter or exit the Batcave. Above is a yellow Bat-logo for decoration. The top floor holds the batcomputer. There is a seat for Batman, Bruce, or Robin, three conrol panels, a coffee mug, and three transparent fluorescent blue monitors; one with a close-up on Bane and his mole machine, the second one with a map of Gotham City, and the third with small computerized images of the Batcycle, Batmobile, and the Batwing. To the sides of the computer, are two large floor lamps which extend up to the height of the former area with the elevator. To connect the two floors, a simple system of stairs is used. Another turret with an "ALERT!" sign is also placed above the stair-case.

In most official pictures, the Batcave is arranged in an "L" shape and a small bridge is used to attach the second and third sections of the set together. 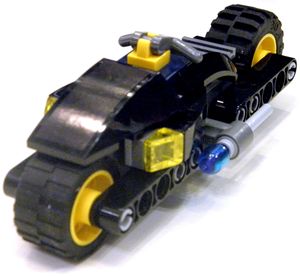 The Batcycle is an updated version of the one which was included in 7886 The Batcycle: Harley Quinn's Hammer Truck. This time, the Batcycle is not arched. It has two yellow wheels - one in the front, the other in the back. It also features two transparent yellow lights on the side with the triangular armour covering. It is controlled with two dark grey handle bars behind the covering and is armed with two light-blue flick-fire missiles.

Bane's mole machine is coloured mostly red. It has two black treads with three red wheels on each side of the machine. Bane sits on the back of the machine and drives it with a steering wheel. There are two curved pieces on either side to give the machine a sleek look, and above are two slope pieces. In front of the red pieces are two flick-fire missiles that are used as the vehicle's weapons. The actual drill is in the front of the vehicle.

This scene depicted in the set is not based on any particular scene from the Batman franchise. However, the set description suggests that Poison Ivy is being held prisoner by Batman and Robin in the batcave. Bane (it should be noted that in the comics, he knows Batman's secret identity) breaks into the Batcave using a drill to try and rescue Ivy.

This is a description taken from LEGO.com. Please do not modify it. (visit this item's product page) Stop Bane from rescuing Poison Ivy at the Batcave!

Batman™ and Robin are holding Poison Ivy at the Batcave. Look out! Bane has broken into the Batcave in his awesome spinning drill tank and is trying to rescue Poison Ivy. Help Batman and Robin put Bane back behind bars where he belongs! Includes 5 minifigures: Bruce Wayne, Batman, Robin, Poison Ivy and Bane.