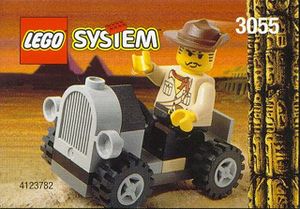 3055 Adventurers Car, a promotional set that came with many Kelloggs packets around the years 1998/1999 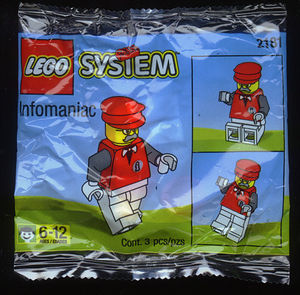 2181 Infomaniac, a promotional set that was available with some copies of the original LEGO Island game in 1997

Promotional sets, also known as Promos, are sets that are given away or exchanged in products such as newspapers, magazines, cereal boxes and airlines. Though there are many different promotional sets and minifigures, they are usually always free (generally with a purchase of something else or as a gift for attending an event). They vary in pieces, some larger than others. They are also exclusive and oftentimes rare, so as to give an incentive to attend the event or purchase the item featuring the promotion. While given away free, these promotional sets can often cost upwards of several hundred (if not thousands) of dollars when resold months or years later due to their exclusivity. This is in part due to both the exclusive pieces and the fact that promotional sets are only given a limited run before quickly being discontinued.