Cookies help us deliver our services. By using our services, you agree to our use of cookies. More information
Navigation
Actions
Reviews
Fan space
ShoutWiki messages
Wiki tools
From Brickipedia, the LEGO Wiki
(Redirected from Battle Pack) 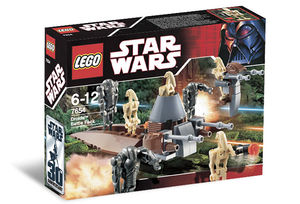 Battle Packs are small sets, usually no more than 100 pieces, that contain an assortment of generic minifigures from a specific faction and are often advertised for "building your army." Usually they also come with some sort of equipment, such as a small vehicle or outpost. Battle Packs are often among the smallest sets in a line, priced low enough to make buying multiples feasible.

There are two sorts of Battle Packs. The Star Wars ones come as full sets with vehicles and usually with four figures. The other themes have Battle Packs which contain 5 figures, up until recently made of Chinese plastic, with only equipment and no vehicles.

Currently only the Star Wars theme has a full assortment of Battle Packs. While Battle Packs were released for the 2007 Castle theme, they are considerably smaller (usually under 40 pieces), do not possess vehicles, and only come with Skeleton and Troll minifigures. The Toy Story set 7595 Army Men on Patrol is also sometimes considered a Battle Pack, as it contains generic green army men, a small jeep, is priced similarly and has a similar amount of pieces.

Older Battle Packs often had worse printing, including errors such as misalignments and fainter colours. The plastic used in them was slightly different, being made in China, while the minifigures featured the special marks that identifies their Chinese origins. These issues have since been resolved.