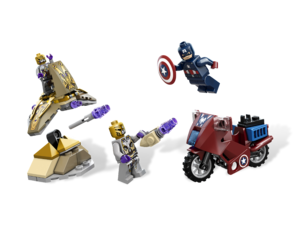 The set in its entirety.

This set is made up of three parts: Captain America's Avenging Cycle, an alien weapons platform, and an alien air vehicle.

The alien weapons platform has a light grey base, and uses mainly tan, dark tan and gold pieces. In the centre of the platform is a flick-fire missile with a transparent purple tip, and the missile's firing angle can be adjusted up and down by moving the hinged piece.

The last model included in the set, the Alien General's one-man air vehicle. Like the weapons platform, it uses a grey and tan colour scheme, and features transparent purple engines, two wings that can be folded up and down, and another purple-tipped flick-fire missile mounted on the underside of the craft. A dark tan piece is also mounted on the front, which can also be folded down. Stickers are applied to each of the three main dark tan parts, which feature a gold and purple design.

After Loki gained possession of the Tessarect, he established a portal to Earth using Stark Tower as a base, allowing for Chitauri forces to invade, starting in New York. However, the newly formed Avengers, including Captain America managed to successfully defend the city and the world, with the Black Widow closing down the portal, Iron Man guiding a nuclear missile through the portal and destroying the Chitauri forces still in space on the other side of the portal, and The Hulk defeating Loki.

This is a description taken from LEGO.com. Please do not modify it. (visit this item's product page) Win the battle against the general and the foot soldier with Captain America!